No Guns at LA Comic Con 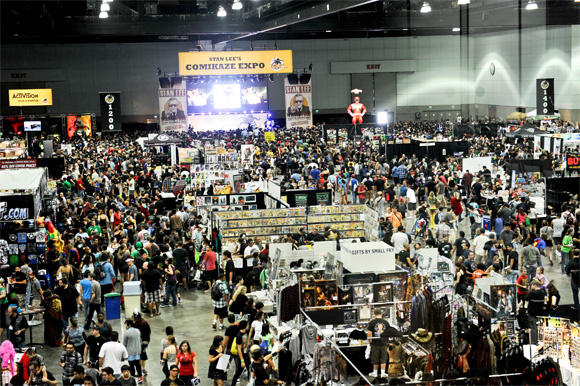 With the unfortunate events of Las Vegas, it was just a matter of time when cons would adopt a more aggressive weapons policy. No doubt that all major public events will have to change their security and crowd management procedures. However, this wasn’t the beginning. I happen to be at Phoenix Comicon earlier in the year when an armored gunman was apprehended while heading to the showroom floor. He was targeting actor Jason David Frank, who was near our booth. Sobering to say the least. Understandably, the PCC show runners implemented a ‘no weapons’ weapon policy for the rest of the weekend- no lightsabers, swords, guns, etc. I just got back from NYCC and noticed a pretty strict code against weapons but still saw some type of guns on the floor. LA Comic Con, which is a couple of weeks away, just announced their updated weapons policy:

Important changes to our Security and Cosplay Weapons Policy
Effective immediately, Stan Lee’s LA Comic Con will be a GUN FREE and PROP-GUN FREE SHOW. This means that anyone who brings a GUN, FIRE ARM and/or PROP-GUN to Stan Lee’s LA Comic Con will NOT be allowed to enter the LA Convention Center. Furthermore, GUNS, FIREARMS, and/or PROP-GUNS will NOT be allowed on the show floor.
·PROP-GUNS: To be clear, props including, but not limited to those that resemble historical guns, science fiction guns, or fantasy guns. Simply put, if it looks like a GUN (and is NOT a banana or your finger), DON’T BRING IT!

Obviously, this is quite a damper on a cosplayer’s costume plans but we all have to adjust with the times. It’s unfortunate that a couple of deranged apples can potentially ruin the experience for us all. While necessary for the sake of security, I say we don’t let it ruin the fun for the rest of us. Our community has been so great to flex and see the positive in any situation. So while we won’t be toting blasters or gunblades, lets show the world that hate won’t prevail. Good luck to all the cosplayers having to adjust to the new policy and hope it doesn’t ruin your plans. What are your thoughts about this new era of change and do you have any suggestions on improving the weapons policies at shows?

6 thoughts on “No Guns at LA Comic Con”