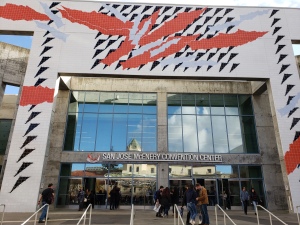 The popular Heroes and Villains Fan Fest made its (almost) annual stop in San Jose this past weekend. For those of you that are unfamiliar with the Fan Fest show, its not unlike other conventions where stars come out to meet and greet their fans. In years past the show mainly featured talent from the Arrowverse (Arrow, Flash, Legends of Tomorrow) or talent from The Walking Dead universe (Walking Dead and Fear of the Walking Dead), but this year both universes came together for one big Fan Fest with stars from each respective universe joining in.

As usual, the Fan Fest was held at the San Jose McEnery Convention Center located in downtown San Jose. This venue also happens to host the annual Silicon Valley Comic Convention as well so staff and volunteers have a good sense on whats going on and how to direct people. The hall was well organized with vendors on one side of the building and most of the talent meeting/greeting fans on the other side. Some of the talented stars in attendance included: Stephen Amell (Arrow), Joh Bernthal (Punisher/Walking Dead), David Ramsey (Arrow), Alanna Masterson (Walking Dead), Khary Payton (Walking Dead) and Candice Patton (Flash) just to name a few. Several other stars from their respective universe were in attendance but the ones I listed were the most popular. Val Kilmer, who has cancelled several recent appearances, was also in the house meeting fans.

Khary Payton (Ezekiel from Walking Dead) signing for a fan.

Fan Fest is is dubbed a show “for the fans, by the fans”. This description does come across as all the stars here seemed to be more “approachable” and down to earth than at other shows. Another thing I noticed was the price of obtaining autographs from your favorite stars has dropped significantly this year. Some who were charge $90 this time last year were now just charging $40–$50 this year. I would say the average cost of an autograph was around $50 which is a welcome change for the average fan. The most expensive autograph that I saw was $80. For those fans that wanted something more personal, you could purchase a photograph with your favorite star and have them autograph the picture if you wish. Photo opportunity prices varied but were pretty much on par with the autograph prices. 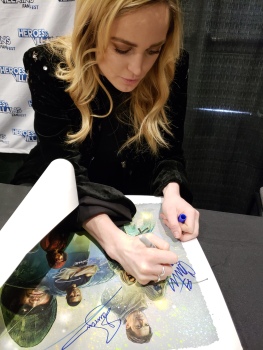 I don’t have any official attendance numbers, but this years event appeared to have more people than last years. Maybe the drop in autograph prices had a positive effect on attendance or more stars attracted more fans. In any case Fan Fest once again put on an excellent overall show. With a large number of stars in attendance that offered fans autographs, photo ops and panels to attend if you wished, everyone should have left satisfied even though our wallets were a little thinner. I’m already looking forward to next years show. Keep it up Fan Fest, and fans will keep attending.