Some of the Biggest and Smallest things at SDCC 2018

This is the short version, I fully plan on expanding more on each of these and more because any side part of each of these aspects can be a minimum of a whole article in and of itself and I am also working on the photos and videos from these and other panels, event, and. In total 300.2 GB was shot and this doesn’t include things from my phone like selfies, and other things.

SDCC 2018 has come and gone, it always seems like while we are there it might not end, but it does, four days in another realm in an entire city we claim as our own with our heroes shown all over in decorations on the hotels, lamps, and celebrated throughout. The badges being easy ways of introductions to new friends, connecting with those you know on social media in person.

There is so much that San Diego Comic Con is far beyond just a con SDCC is it’s own special existence. The installations and celebrations expand far beyond the convention center. There are those every year who come just for those and they can be pretty interesting creating the worlds we know and love with all sorts of various things to do as well.

Each hotel can also be its own ecosystem of pop culture as denoted by the various decorations and installations within. In some cases you never know who might be staying at your hotel such as with the Hilton Bayfront which I was in this year it seemed as if the entire cast of all of DCCW’s shows where there as I had conversations with Echo Kellum and say several others in the casts.

There are many that come for these the big shows and the stars and celebs who are always fun though some of the best and most memorable experiences can be with the programming, sometimes the smaller things and also in the events put together by friends.

This past year we lost many great figures in pop culture including several who have had enormous effects on pop culture. Four tributes were held for creators Len Wein whose creations and impact are too numerous to list in a brief article, Len Wein, Harlan Ellison, Steve Ditko, and Jon Schnepp.

In the official convention programming there were the tributes for Len, Harlan, and Ditko, I was asked to shoot photos at Len’s while another videographer GS, captured the video using my tripod. (That should be available soon.)

The tributes were celebrations and stories of their lives with those who knew them best and all the great stories full of heart, humor, and some tears.

For Len it was this a celebration of his life, memories with friends, and some about his works all full laughter and some tears. Moderated by Gary Miereanu, the main shares of stories were Lynn Latham, Gillian Horvath, Christine Valada, Melinda Snodgrass, Paul Levitz and Charlotte Fullerton with several other guests in the audience telling stories.

Comicsbeat also captured some of the tributes in audio along with several other panels.

The Jon Scnhepp tribute was held in the Grand Hyatt and organized by Lauren Matesic (Castle Corsetry) and Bernadette Bentley as a celebration of his life. Many friends came together to share stories in a beautiful setting known for the sharing and the celebrations of stories. 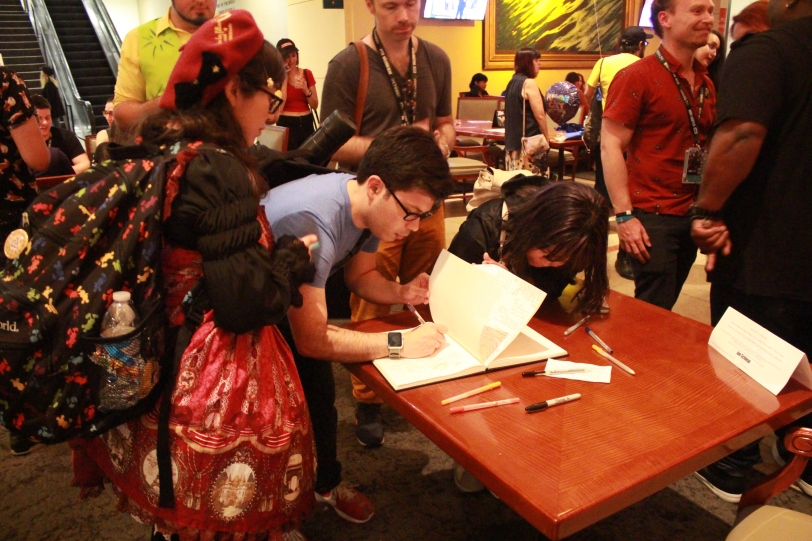 Near the end of it everyone raised a glass in celebration of his life. 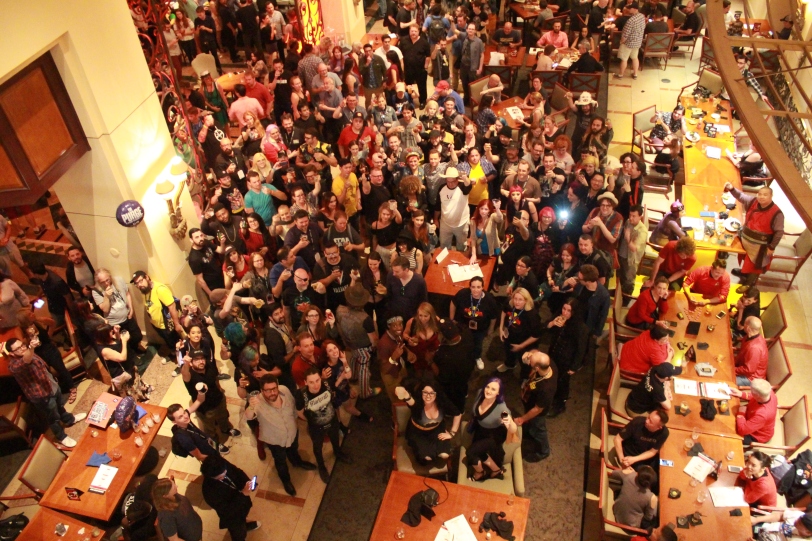 This year also had programming about rebuilding from loss such as with Brian Fries who lost his home in the massive California fries and has drawn and written how he and has family dealt with it. A prolific writer and artist he lost many of his awards in the fire, and in a truly special showing Charles Kochman editor in chief at Abrams Comics Arts arranged to have the awards reissued including ones that were no longer made. (Charlie is one of the best people in comics.) 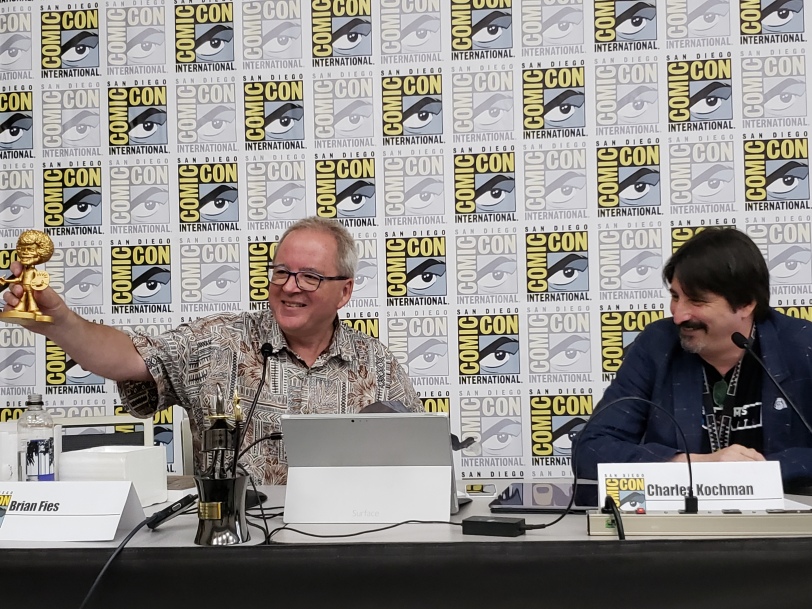 Moving past loss and working to make things better is a theme in many comics works.

The Eisners was also a massive showing of the evolution in comics with many diverse creators (and quite a few friends) being nominated and winning many of the awards showing the power of the medium of comics with wonderful speeches from many of the presenters. As I have said the Eisners is some of the best programming that non-pros and industry have not been attending.

There’s a lot of programming like this, due to schedule and hard work (because you have to make sure to pay bills) around SDCC I was not able to go through my recommendations on programming but there was so much with luminaries perspectives, diversity in comics, the potential of the medium and so much more. These may not be the biggest panels, but are some of the most enjoyable and most important.

There were many panels of pure joy one of which has been my recommendation of Toonstock which this year was joined by the amazing voice actor one of your favorite voices and mine John DiMaggio.

I specifically prepared my Vigilante cosplay and my singing voices for this as he was a singing voice for Vigilante. The Warner Archive guys were excited to see this as was John when he saw it. Like I said this such a great event every time, so even if you’ve been to one, you should come again. 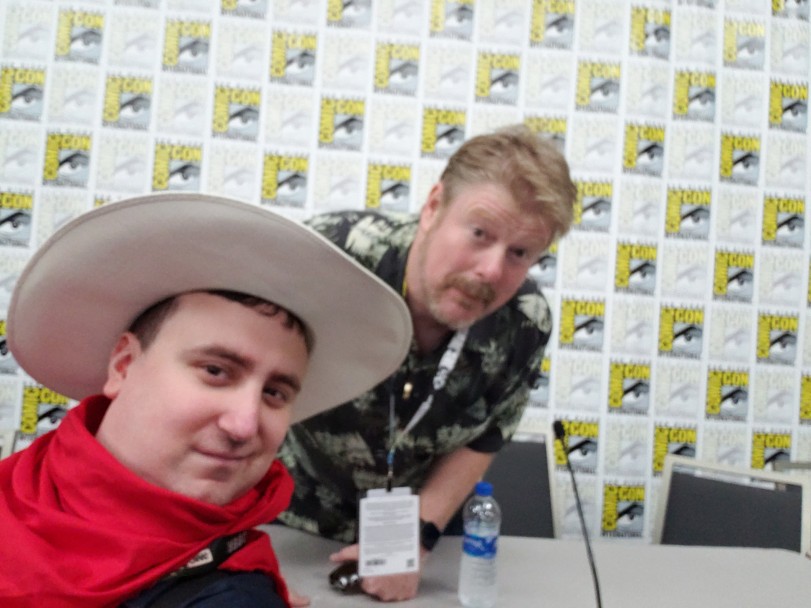 This year was also a celebration of the conclusion of Elfquest which I did the video for (and that is coming soon). One of the great American independent comics Elfquest has reached its 40 year conclusion with many memories shared by Elfmom and Elfpop Wendy and Richard Pini. But as we learned while an aspect of Elfquest has ended the story will continue in comics form and perhaps it will also be in new media formats as well. 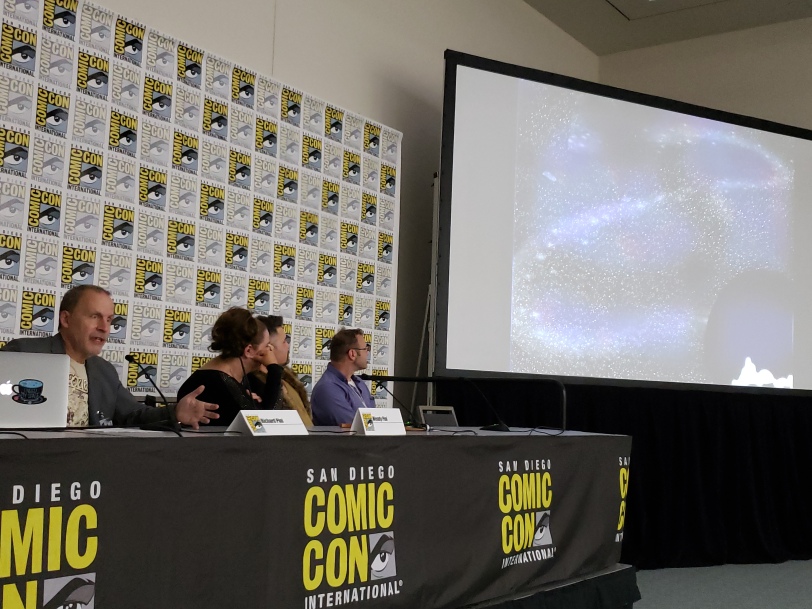 Afterparties and such will be talked about in another article, but I want to end with one of the most special things that happened while I was in my Vision cosplay. (This is a picture with my friend Tallest Silver) 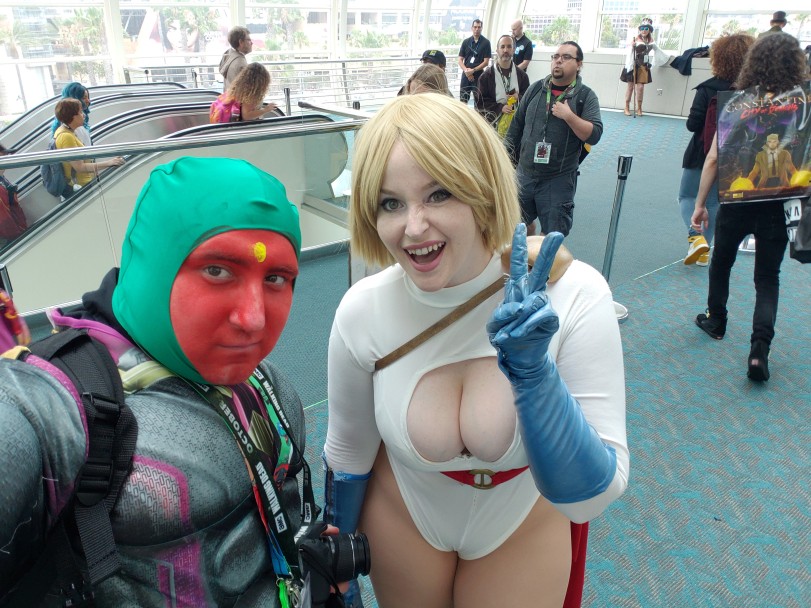 A little blond girl came up to me and started talking to me as if I was the Vision (don’t worry her mom was there). She wanted to know more about the Avengers especially T’Challa because he was her favorite Avenger so I spoke with her for several minutes and she was totally engaged. Only a few years ago she might not have known who T’Challa was, the history and awesomeness of Wakanda and the Black Panther, and it’s the kind of thing that gives a lot of hope for the future not just in fandom but for the world.