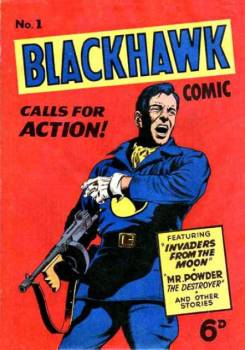 An interesting news blurb caught my eye this week so I thought I would post on it here. Mainly that the great Steven Spielberg has teamed up with Warner Bros. to produce a movie based on the classic Blackhawk comic franchise. This caught my attention because over Christmas I was having a conversation with my dad about comics and he mentioned he used to read Blackhawk. He even went so far as to buy me an old issue of it to read. I am pretty sure my younger self would have loved it.

If you are unfamiliar with Blackhawk it is one that your parents (or at this point maybe even your grandparents) read when they were young. The Blackhawk Squadron, led by their mysterious leader, aptly named, “Blackhawk” were a unit of ace fighter pilots. First published in 1941 by Quality Comics and later DC, it ran all the way into the 1960’s and at its height it was out-selling everything but Superman (take that Batman). This is one of those seminal comics that went on to inspire countless creative types who then went on to write the stuff that in turn, inspired us.

With Warner Bros. very mixed run of super hero movies where does that leave us fans? Who knows? I think having Spielberg attached to it gives it more than a fighting chance, though Ready Player One was by all accounts was lackluster. But with way more successes then failures, Spielberg may be the perfect person to bring the franchise to life. If anything, else, he will respect its history and understand its influence on the comic world.

Don’t worry though, this won’t be a rush job and Warner Bros. has plenty of time to get it right.  Spielberg is currently working on the next Indiana Jones movie and is then set to shoot West Side Story. It will be awhile but hopefully this means we will be getting a visit from him at Comic-Con as well!

One thought on “Steven Spielberg To Direct Blackhawk”