Cosplay has become quite the spectacle at cons and with aid of the internet and TV shows such as Cosplay Melee, your every day person is learning about this world. I say world, because there is SO much involved with cosplay but it is still something accessible to all. In this series, I talk with cosplayers of all levels and ask them what got them started, what they have learned, and much more. Welcome to Cosplay Decoded. I hope this series inspires you to try cosplay if you haven’t yet, continue your cosplay journey if you are a regular cosplayer, and generally learn more about this awesome hobby/lifestyle.

What is your occupation?

I work at an independent study charter school as a Special Education teacher. I work with both middle school and high school students.

What got you started doing cosplay?

I first started cosplaying in college. It was Halloween, and I had stumbled across a website that sold Star Trek prop replicas for relatively cheap. Without thinking about it, I ordered a replica PADD and the EMH Mobile Emitter. I couldn’t afford an official replica costume, so I asked a friend of mine to make one for me. She made her own costumes already, so she was a natural choice. We agreed on a price, on top of me buying the materials, and she was able to me a “Star Trek: Voyager” command uniform jacket in about a week. For the longest time, that was my only cosplay, which I mainly just used at Halloween.

How long have you been cosplaying?

Have any of your hobbies/occupation added to your cosplay?

A little bit, I think. I read a lot, and a couple of my costumes now come from things that I’ve read and really love. I’ve read “Ready Player One” by Ernie Cline several times, and a few years ago I realized that putting together a Parzival outfit wouldn’t be too difficult. At the end he’s really just wearing a black t-shirt, jeans, and a pair of Chuck Taylors, which I already had. I added in a store-bought wizard’s cloak and made a set of keys out of cardboard and paint. I also knit in my spare time, and I’m slowly putting together a Harry Potter cosplay with my knitted Ravenclaw house scarf.

Do you make your outfits or do you have them commissioned?

My first cosplay outfit was a commission, but now I prefer to make them myself when I’m able to.

What has been one of your favorite cosplays?

My Parzival cosplay, by far. I’ve never seen anyone else do any version of him. Most people who ask about it don’t know what it’s from, but if they’ve read the book, then they usually really like how I’ve put it all together. It’s such a simple cosplay, too, so if I get too hot walking around, I can always take off the cloak and I’m just another anonymous face in the crowd.

Do you ever cosplay with your friends/significant other?

Yes. My fiancé, Jared, and I have so far only done one couple’s cosplay, which was a male Ruby (me) and Sapphire (Jared) from the show “Steven Universe. The characters match our personalities a lot, and we just love the show, so it was a natural choice for us. 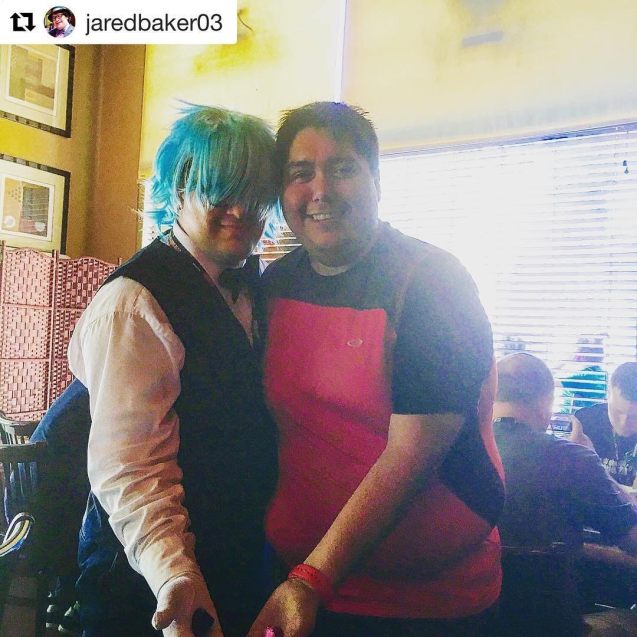 What has been one of the best benefits from doing cosplay?

Just being able to share my love for the characters I’m cosplaying as with other people. When Jared and I debuted our Ruby & Sapphire costumes last year at SDCC, we got a lot of Steven Universe fans stopping us to talk and admire what we’d put together.

What would you say to someone who has never cosplayed but wants to?

Just go for it. There’s no right way or wrong way to portray a character, there’s just your way.

What are your top three suggestions in regards to cosplay?

1) Don’t make yourself uncomfortable. Make sure that you’ll be wearing something that you like but also doesn’t hurt you. If you’re going to a big convention, chances are you’ll be walking around a LOT, so keep that in mind when putting your outfit together. Always wear comfortable shoes.

2) Do cosplay your way. Ignore the people who don’t like what you’re doing (unless you’re trying to offend someone – don’t do that!)

3) Choose a character you really know. Bonus points if it’s one you’re really passionate about. People get really excited about the cosplays that they see, and will sometimes want to interact with the cosplayer: chatting, getting photos, and the like. Have fun with it, because that will really shine through for the people who want to interact with you. Make sure that it’s as fun for you as it will be for the people you’ll meet.

Somewhat of a follow-up, what are some things people take for granted that they should remember?

Study your character before you start. Have a couple of poses ready for when people ask to take pictures with you, which they might. Have a good story for your cosplay if it’s not something that people will easily recognize.

Have you personally ever experienced any negativity for doing a cosplay?

None that I can recall, no.

Generally, the cosplay community is very supportive but it can also be very judgemental about people not looking like a character. Have you ever experienced anything like that?

What would you say to someone who is nervous to cosplay a character they look nothing like?

Again there is no wrong way to portray a character, there is just your way.

What cosplays do you have planned for San Diego Comic-Con?

I’m hoping to have several cosplays ready for this year’s Comic-Con. Right now I’m planning to bring back my Parzival and Ruby cosplays, along with a couple of new ones: Theodore of Oz (a gender-bent Dorothy, complete with checked blue shirt and silver Chuck Taylors) and possibly a Marco Diaz cosplay (from “Star Vs. The Forces of Evil). Those last two are still in the works, but I think I’ve got a good start on them.

Where can people find out more about you and your cosplays?