It is no secret that Free Comic Book Day can get a little chaotic. To be honest, I often only venture out to one store and keep my visit relatively brief. The hour long lines and people who will do just about anything to get the comic they wanted tend to frighten me enough that I usually stay away. And you can FORGET about cosplaying. 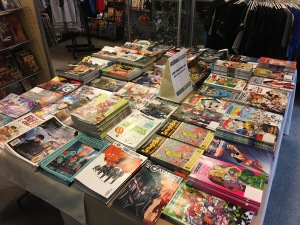 This year, however, I was asked to help out at Comics and Friends at the Great Lakes Mall in Mentor, Ohio. While I would usually run from such an invitation, I will do just about anything to help a friend, and so I agreed. I woke up early and donned what I will now refer to as my “Emo Ariel” costume, and headed for the mall. I received plenty of strange looks as I walked through Macy’s to get to the comic book store. #CosplayProblems

Upon arriving, there was already a line outside of the store, and it continued to grow quickly until the store opened. I was put on “bouncer” duty, taking charge of the line and letting in a few people at a time. Normally a person who is anti-confrontational and somewhat spineless, I thought this job might be too much for me, but somehow the fiery red hair emboldened me and I started taking charge. I even began conversing with people in line. Who would have thought it?! 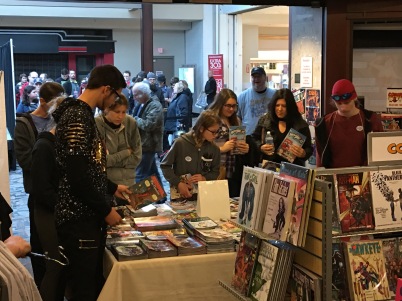 Thankfully, most everyone was willing to play by the rules and there weren’t many folks who were complaining or being grumpy, and I only had to say something to line jumpers one time. I talked with a bunch of REALLY cool little kids who knew their comics. It was adorable that they actually taught me a thing or two. It only took about an hour for most all of the free comics to disappear, and within that time there were somewhere around 1,000 who came in and out of that little store. I couldn’t believe it. I was totally exhausted at the end of the day, and I wasn’t even working the register!

Next year I will have to make sure I get plenty of rest the night before, but I imagine I will volunteer again. Things don’t seem to be quite as similar to Black Friday if you’re on the other end of it. What was YOUR Free Comic Book Day experience like? Comment below or tweet me at @amlehr to tell me which comics you picked up and if you got any extra goodies!

One thought on “My Free Comic Book Day Experience”