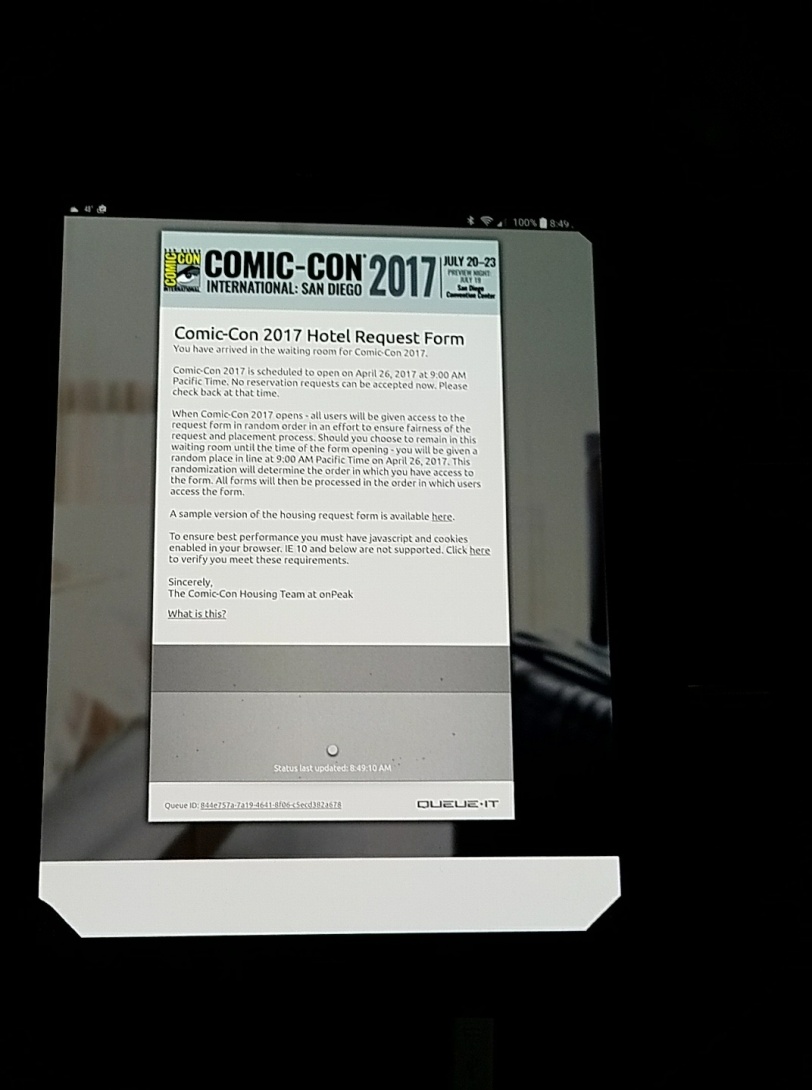 Another Hotelapocalypse is done now its a waiting game but today I’m not here to talk about people getting in at 9:02 or 9:03 am and their chances of getting a coveted spot in one of the downtown hotels.

This article is going to be about what most people find wrong with Hotelapocalypse. The hotel sale should first and foremost be about people attending the Con (badge holders only). There is only so many rooms that are available at the discounted rate provided in the Hotel Sale and they should be available to every single person attending SDCC but unfortunately most of the actual attendees get stuck outside of Downtown and on the shuttle route. Since the Hotel sale is open to everyone under the sun, a lot of the rooms go to non-attendees. I’ve got no problem with people who want to go and enjoy everything SDCC has to offer outside the con but they shouldn’t get to take away rooms from the people pay to be at the con! They should only be allowed to either do the early bird or have to pay the hotels full prices.

I know by talking to others and by reading online I’m not the only one to feel this way. What needs to happen is more consideration for the people paying to attend their con. It needs to be a closed event for the people who have at least a one day badge only. The event should not be allowed to be attended by Pros/Retailers that don’t like their Hotel selection since we can not be involved in theirs, there is no reason that they should be in ours.

There are other ways to do the Hotel Sale to make it fair for the people who are paying their hard earned money to actually go to what has to be the most expensive Comic-Con in the world to go to. Don’t get me wrong they have tried to help, by make things a random selection and so on but that’s not what this is about.

What every single badge holder that participates in the hotel sale wants is a fair chance to stay downtown. If everyone knew that they were only going against other badge holders and didn’t get Downtown then they’d be ok with it, but the fact that someone who isn’t even going to the con gets a chance to take that away from a badge holder is just wrong and CCI has to see that they are hurting their fans. I and others have asked, “CCI why do they make it open to everyone instead of just attendees only and we get the its complicated line.”

I’ve been sitting and thinking for the last few days since Hotelapocalypse, taking sometime to just cool down from my initial thoughts on the matter and pose to the audience as we wait for our results of Hotelapocalypse. What do you all think, am I wrong and alone on thinking this way about the Hotel Sale this way? I just wish the folks at CCI would remember why they started this con all them years ago and that’s about the fans. But, it seems that it has grown so big that it has become a business of comic-con and more about making money then providing fans with the things they truly need housing being one of them.

So, as we go into these final hours of waiting for our notices of victory or sadness of hotel placements I want to wish everyone good luck and let me know below what you feel is wrong with Hotelapocalypse or let us know where you end up in the sale.

9 thoughts on “What’s Wrong with Hotelapocalypse”