Luckily I was able to meet the panelists beforehand. Super nice people!

At WonderCon, Earpers gathered at the Wynonna Earp panel to hear Tim Rozon, Alex Zarowny and Kate Drummond talk about Season 1 and possibly dish on Season 2. They were not disappointed. Read on to get a taste of the panel.

When asked what it’s like to be a part of Wynonna Earp, Tim said, “I’m Doc Holliday on a comic book show…I’m blessed…I’m living my dream.” He went on to say how much he loves the fandom and wanted to emphasize how his constant enthusiasm is, in fact, genuine.

Moderator Allison Baker asked Alex how fun it was to write for this show. Alex commented how she has been working with Emily Andras since Lost Girl and had discovered that they both have a “crazy brain”. She went on to say how they both believe it is important to represent all relationships and people. Alex also talked about when writing a script, you write it alone and, humorously, she added “in your unicorn underwear”. She said that the script looks like a skeleton, but the actors breathe life into it and she is lucky to have these people playing these characters. When asked who her favorite character is, Alex said that it changes with each episode which she indicated is sort of a guideline to writing a good show.

Kate revealed that she was an elementary school teacher for twelve years. She wanted to “lead by example, that anything is possible and follow your dreams”. She said that at 30 years old she was doing the right things, but her inner artist was crying. She took her first acting class at 30 and then at 35, while teaching the Martin Luther King speech to a class, a student asked her, “what is your dream?” She said that it was to act and the student replied, “why aren’t you doing it?” Kate realized she could not be a good role model when she was not following her own teachings. She certainly “didn’t expect to love it [acting] and feel at home as I did”. She took a leave from teaching to be true to herself. Alex alluded to a small teaser for season 2 by referring to Kate’s character that: “There’s more. There’s so much more to come.”

Allison pointed out that Kate worked hard to do a lot of her own stunts. Tim added, “If I can physically do it, I want to do it.” He went on to say that, “some days you get to kiss someone, another day you get thrown out a window.”  Tim was proud he did not need a stunt double during the epic fight in the finale but Shamier Anderson (Agent Dolls) did. Tim said that they have an amazing stunt team involved with the show and that he completely trusts them. Tim went on to tell a funny story about how he was, “literally doing nothing then I stabbed myself in the rib with my gun” during the finale. Other than that, he did not get hurt during the finale.

Kate explained it as, “I need to be in my body.” She said she is a physical person and did sports while growing up. She referred to one of the stunt rehearsals as super super fun. No spoilers, but she did say, “I was shaking after this one scene” because she was so pumped. She added that it is everything that makes the stunt look amazing. From the lighting to the camera to the performers to the stunt actors, it all comes together to make it look as good as it does. Tim jokingly added that he prefers the kissing scenes. He also said that if it is a sexy scene, Alex wrote it.

Tim was asked what it is like to write a comic of your character and he said it is the “greatest experience of my life. I am such a nerd, that I make nerds not look like nerds.” He went on to praise Beau Smith, good ole Papa Earp, and said that they trust each other but Beau keeps him on track with all his crazy ideas.

Tim was asked what is his favorite Western and he said “Butch Cassidy is pure perfection”, but he does not understand the ‘raindrops’ scene because he does not get how it fits. He added, “Of course, I’ve seen Tombstone.” He also likes Sergio Leone films. As a kid, he watched westerns and even read Wyatt Earp comic books.

Alex pointed out that Tim originally auditioned for Agent Dolls and that Tim had played one of her favorite characters from Lost Girl. However, she went on to say that instantly “we knew we had found our Doc” and that Tim was the “only actor that could play that role and be authentic”.

In regards to the fandom, Tim commented how watching it grow is special. He said watching Mel, he knew they had something special because “She’s Wynonna”. He went on to say that the moments between Waverly and Wynonna, after everything they go through, really makes the show.

Regarding Emily Andras, Alex said, “There is definitely magic in that woman”. She said it was so fun to be part of the world Emily creates and was happy to “deliver something to the people who need and deserve a voice”. She also said: “We do take it into account what people are saying. We listen. Thank you.”

Kate started off saying she was trying not to cry while speaking about the fandom. She felt it was a “pretty spectacular thing to watch Mel, quite frankly, watch everyone work”. She also said, “There’s something about the heart of this show. You instantly fall in love.” Allison added, “We are fans of the show too and that comes through.” Anyone who has watched the show would agree. Allison then said, “I know it sounds super silly but we’re all one big family.”

The panel was asked to pick a famous Gunslinger that they would want on the show and, without any hesitation, Alex said Calamity Jane and that they “need to get more ladies in there”. Kate said Sarah Connor was her first instinct though she is not exactly a Western Gunslinger. Tim suggested he wanted to see a reenactment of the OK Corral but have Wynonna come and save the day instead of Wyatt.

For those of you that want to purchase the Blu-ray stay tuned – it has a rough release in the summer or fall and it will come with special features.

Allison ended with, “Without you guys we wouldn’t have a Season 2, 100%…We wouldn’t be on Space in Canada. Thank you!”

You can currently watch Season 1 on Netflix. You can also watch the Wynonna Earp aftershow which I co-hosted on Afterbuzz.

Season 2 is scheduled for June 9th. 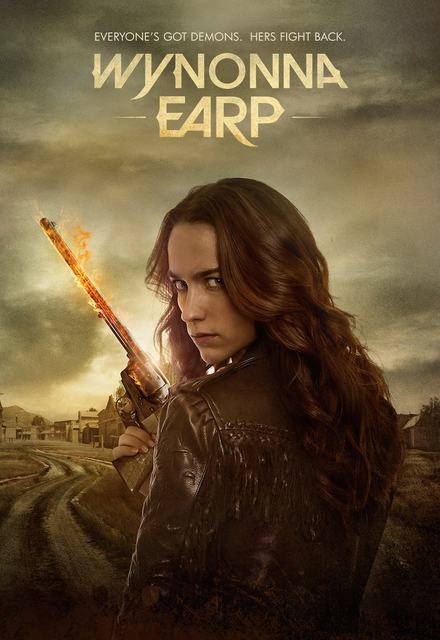