My review of Star Wars The Force Awakens

After about a decade of PTSD (Prequel-Traumatic Stress Disorder), 3 years waiting and then skipping a year of trailers and clips- the time finally arrived to watch Star Wars The Force Awakens. In one phrase, it was worth the wait. I am overwhelmed with thoughts about what I just saw and honestly should see it again before writing this but I also feel compelled to share my feels while everything is fresh. To start, I am overjoyed with what I experienced. It was a perfect blend of the sentimental and the brand new. JJ Abrams and company, in many ways, had the proverbial cards stacked against them. The pain of Ep 1-3, an aging cast, introducing a new one and attempting to put the entire future back on the rails from which it derailed. So the best way I can do this is by grading it in all the major areas. (warning, spoilers ahead!)

This was arguably the hardest part. The Prequels had many failings but it’s most egregious offense was that we cared very little about Anakin, Padme and company. Fast forward to today and JJ made sure that history would not repeat itself. Spearheaded by Daisy Ridley’s Rey, the new ensemble is fresh, vulnerable and relatable. They feel like real people with real emotions. Following suit to his past movies, JJ does an amazing job evoking emotion through non-verbals. Their convincing expressions says more than their words in many scenes- which was sorely missing from the Prequels. The pivotal scene was when Daisy was being interrogated by Kylo Ren. Within just a few minutes, Rey went from terror, to confusion, to determination, then to confidence. It was a tremendous moment for her (and the audience) and revealed what was at the heart of this story. Han Solo’s return to the screen was triumphant and every scene was emotional and sentimental. This is the first film in a decade that it felt like he was actually having some fun. JJ should be awarded just for his contribution of BB-8 into the Star Wars universe. Who would have thought that a little soccer ball with a bowl could have so much personality. Clearly there was one too many droids in this film, but I’m glad they gave BB-8 the spotlight for the first part of the film. Adam Driver’s Kylo Ren might have been the weakest part of the cast but I still liked him. He was certainly terrifying at times and watching him wield the dark side of the force was a thrill. His human side was only partially successful but there is plenty of time to see him grow into the role. John Boyega’s Finn brought a fun enthusiastic energy to each scene along with his friend Poe Dameron (Oscar Isaac). Solid performances throughout.
Grade: A

What’s a Star Wars film without special effects? The key to making a special effects heavy movie is not making it look like a special effects movie. JJ’s Star Wars has become the healing balm to sooth our scars left by the Prequels. While I know every scene has cgi in it, I wasn’t aware of it and found the experience tactile, authentic and honoring of the original trilogy. From BB-8 to the Millennium Falcon, it could not have been any better. The ‘cantina’ homage was fun, creative and well done. Even Lupita Nyong’o cgi character, Maz,  was done convincingly. Not sure Ackbar was practical but he looked practical, which is what is really important. Bravo JJ, bravo. Grade: A+

Music
While we all universally love the John Williams score, let’s admit that it is easy to abuse. A big swell here, a loud march there and you have what the Prequels did. Well not in this case. The Force Awakens uses the score smartly and introduces some new themes that quickly became an iconic addition- namely Rey’s Theme. It hints at the melodies you know and love throughout but doesn’t over do it. Much of the emotional moments owe it all to this wonderful score. You can listen to it for FREE on Youtube!
Grade: A

While I easily handed out a bunch of A’s so far, I am really going to ding The Force Awakens when it comes to the story. It started out strong. I think we all collectively sighed when we read the opening space crawl. Simple, compelling, and clear. The first half of this film is a BB-8 and Rey survival story and it really nails it. Then the idea of finding Skywalker is introduced- perfect, keep going. Then the B-story takes over where they have to, yet again, destroy another planet killer. It was almost comical as Han was problem solving this for a third time. It just wasn’t necessary to ape another Death Star plot yet again. Sure it’s bigger but to me it was pretty lazy and not as good as the original trilogy. While I think the character development was for the old school and hardcore fans, I think this mission was for the kids (I have a much better story suggestion below). Han’s story to find his son was a great plot twist and Rey figuring out her place in the universe was fantastic. However, it’s all weighed down by this ‘been there, done that’ plot device. I was shocked that JJ returned to this so soon- worst of all, it pretty much means you can’t return to it again (which should have been a Episode IX plot instead). Fortunately, this was the B-story so not all was lost. Losing Han was tough. I mean, real tough. But I praise that decision because the stakes needed to be high. With a bloated cast, there needed to be some trimming back and let’s face it, as long as Harrison Ford is on screen, no one will be able to lead this new trilogy.
Grade: C-

Final grade: B+
I know, it feels like this should be higher but after 16 years, the story should have been more inventive than what we got. I probably rank it after the original trilogy- maybe a shade above Return of the Jedi. I think I have to watch it again to judge it on ‘re-watchablity’, which the original trilogy definitely has.

What I would have done… 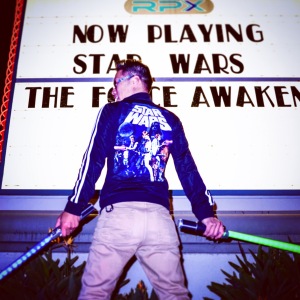 They started on the right track- the focus on the adventure should have been the recovery of BB-8 since he has the map to Luke. So when Rey gets captured by Kylo, BB-8 should have been as well. Then they both should have been held prisoner on Kylo’s star destroyer. The Resistance then plans a search and rescue mission against the superior enemy destroyer. A ship to ship battle ensues on the outside with a multiple layered mission on the inside where Leia wants BB-8, Finn wants Rey and Han wanting Kylo. Not only does Rey’s force awaken but BB-8 does some Houdini magic with them eventually finding each other. R2 is also brought on board to disable the ship defenses so he actually gets a chance to do something. Leia and Ackbar can lead the ship assault with all of the results ending exactly the same. By simplifying and focusing the action, the story stays contained for this first Episode, giving room for planetary battles in the future. Boom. Drop the mic… **walks away**

Overall, I could not be more pleased with what I experienced. Sure, it was not perfect in a couple of areas but it really did accomplish a monumental task of ushering in a new generation of films. It pleased old fans and new and left you wanting more. While I loved the old cast, I am so interested in seeing what adventure lay ahead for Rey, Finn, Poe and BB-8. It was easy to be skeptical when Mickey took over the property but it’s clearly in the right hands. Let me know what you thought of the movie, if you agree with my review and what you hope to see in future Episodes.

12 thoughts on “My review of Star Wars The Force Awakens”