What was so different about Rose City Comic Con? 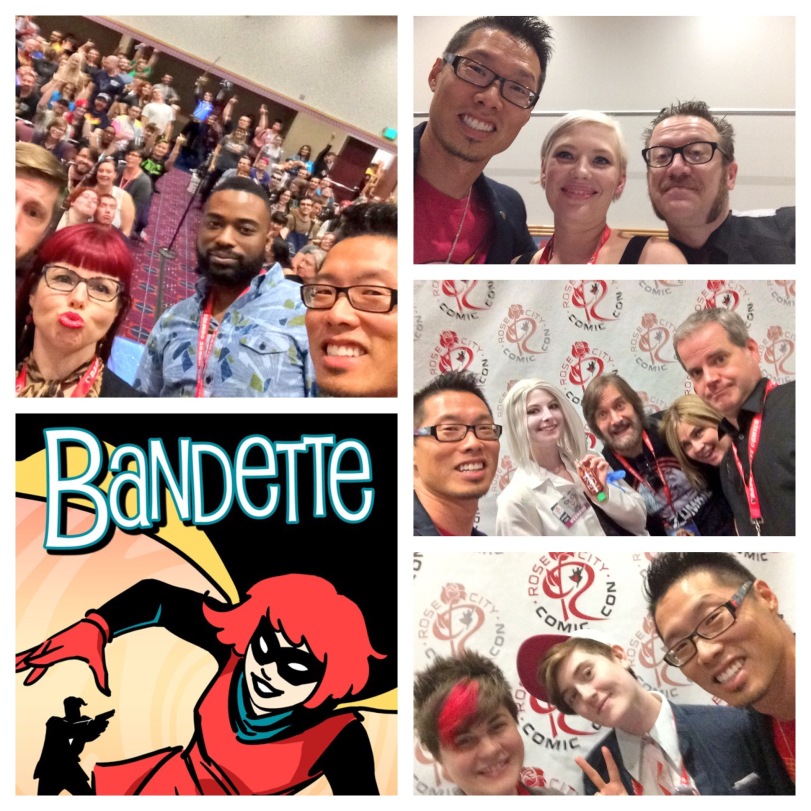 I just got back from Rose City Comic Con in Portland, OR. In it’s 4th year, RCCC has grown quite a bit numerically as well as in reputation. Now taking over the entire convention center, this con is expanding it’s experience to to cover comics, web, TV, art and film. The show runners, staff, and volunteers are all fantastic and I always have a killer time. The only thing that would have made it better would have been having Voodoo Donuts waiting for me at the podium before each panel- a boy can dream. While there were many of the familiar aspects that you would find at many comic conventions, this one really stood out in a special way.

Over the weekend, I had the privilege of moderating a great line up of panels for the show, mainly focused on comics. While I am grateful, to facilitate a conversation with any content creator, this was the first time that a majority of my panels were about female led stories or female teams. Those panels were; Lady Killer (Joelle Jones, Jamie S. Rich), iZombie (Chris Roberson, Mike Allred, Laura Allred), Bitch Planet (Kelly Sue DeConnick, Valentine De Landro, Robert Wilson IV), Bandette (Paul Tobin, Colleen Coover) and Lumberjanes (Shannon Watters, Brooke Allen). Not many would have made this connection but since I have a bird’s eye view as the moderator, it was glaringly obvious. While each panel discussion covered similar topics, they all unknowingly had a common theme that was subtlety stated over and over again; “I want to create a comic that I want to read…”. As diverse as the heroines were from book to book, each creator wanted to portray honest, broken, courageous and relatable female protagonists. They also shared that the journey to see their characters come to life has not been easy within an industry that is slow to take risks. Resistance, cynicism, and rejection, have been around every corner but each of these creators had a vision and fought until it was fully realized. They each proved that market has always been there but the right characters and stories have not. The best part is that it was women and men together fighting for change. Similar to any marginalized group, only by the collective effort from both the minority and majority can the ‘needle of change’ be moved in a positive direction. What I love about cons is that you can tangibly see culture shifts happening AND play a part in it.

It was also exciting to entertain the possibility of TV or film adaptation for each of these properties. We’ve already seen iZombie turned into a CW series and I think each of these books have just as much potential. Not that TV and film is the singular goal, but we still need equal representation at every level of media. Over the next couple of weeks, I’ll be posting the audio from some of these enlightening conversations. I applaud RCCC and their intentional decisions to give these books a platform- check out more info about Rose City Comic Con and make plans to join us next year!