Now that the Comic-Con program is going live, it’s time to do some serious schedule planning. If you are new to SDCC, one of the most common questions I get in these final days is in regards to when to line up for panels. With all this talk of getting in line hours before or even camping out overnight, it’s pretty overwhelming to visualize if you have never been before. Lining up for a panel is a tricky thing- and is more of an art than a science. So as you review the programming over the next few days, here are some priorities to consider while planning your schedule- then I will breakdown each main rooms.

If you want to experience the mother of all panel rooms, then Hall H should be the top of you list. This cavernous beast holds 6,500+ victims in her belly making it the largest comic convention panel in the galaxy! In recent years, it’s become part of the con culture to camp at ungodly hours of the night. It was just announced that the  ‘Wristband System’ will be back for Hall H. Full details have yet to be explained, but if it’s like last year, you will have to in line right after the last panel of the previous day to have a shot at getting a wristband. Wristband groupings were divided in A-D sections for the first people in line. I’ll write more on this once I find out more info. At the show, I would encourage you to stay tied in to Twitter for line updates from fellow fans.

If you read about the moans of getting a ‘D’ wristband, it will probably be too late for you. Silver lining is that the most popular days this year will be spread out among Doctor Who on Thursday, Star Wars on Friday, and DC/WB on Saturday. Perhaps the spread of big Hall H days will thin the crowd by the weekend. More on this shenanigans later. 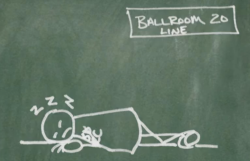 While not as daunting as Hall H, B20 is a formable adversary as well. Hosting most of the larger TV show panels, the camping culture is starting to affect this space as well. Called the ‘Everything Else Line’, B20 will start outside in the front of the convention center and will span across to Hall H. In the early morning, maybe around 7-8, the line will be allowed to enter then will be divided into different lines for Exclusives, Autographs and B20. This line is harder to gauge since it starts inside near the room, goes outside under the tents, then wraps around the backside of the building. With a room capacity of 4,000+, it’s difficult to gauge just how far back you can go in line to make it in. Last year, they started using section cards to help manage expectations. For at least this year, getting in line (outside) by no later than 5:00 should get you into the first panel of the day. After that, it just depends on the schedule. Give yourself about a 6 hour head start on your target panel. B20 also has some unexpected pockets of the day when you can just walk in. Keep up on Twitter to catch those moments.

These are the next two largest spaces holding 2.1k and 2.5k each. Because 6BCF is in the heart of Programming, it stays consistently full because of overflow from other panel rooms. Lines are long (and hard to gauge because of line breaks) with wait times being a few hours. The Indigo Ballroom has been the most pleasant to experience in recent years and has hosted some big panels. Since you have to leave the convention center and go over to the Hilton Bayfront, it attracts less traffic . Room 6A holds about 1k then all the rest are under that. The rest of the panel rooms 4-11 will stay filled consistently. Gone are the days of being able to walk in and out of these smaller panels. If your target panel is in one of these rooms, expect to get there an hour or two before to be safe.

Pair up in order to achieve your goal. Panel hopping in pairs is so much easier because someone can sit in line while another can explore the options. Two can wait in two different lines then decide who has the better chance of getting in as you approach the start time. Plus, it’s much easier to make food runs with a partner. I know there is a lot of people going solo out there but partner up if you can. If you can’t partner up, then I would suggest you take a more conservative approach and stay in a room instead of panel hopping.

It’s Larger on the Inside
Room capacities play a big part in the feasibility of getting into a room. Back in 2006, you were able to walk into most of the smaller rooms- that is no longer the case. Every room is now pretty much filled to capacity hours to minutes before start time. Here are approximate numbers for some of the rooms:

Oh, Don’t be a cosplay hottie…

Looking hot in cosplay is one thing, being hot is another. Which panels you should attend might be affected by if you are going in cosplay or not. A lot of Hall H waiting is not conducive to hardcore cosplay. If it’s a particularly hot Comic-Con (looking pretty fair so far), Hall H can cook you faster than Kal-El’s heat vision. There’s nothing worst than a Wookie with heatstroke. So if you say yes to insulated cosplay, so no to Hall H.

Make sure to check out the rest of my Tip of the Day posts. Please leave a comment with your panel strategy tips. Catch up on past shows, tweet this post out, and make sure to subscribe to Shout! Factory!