With Comic-Con less than a month away, the news of Exclusives and panels is starting to whip everyone into a nerd frenzy. Beyond excitement about Star Wars and Supergirl coming to SDCC, many are looking forward to one thing and one thing only- meeting a celeb. Whether it’s JJ Abrams, Peter Capaldi, or Nathan Fillion, most of us dream to have at least one magical encounter during the 4-days in San Diego. If you are new to Comic-Con, it’s actually easier to run into a celeb away from the con than inside it. Because of large mobs, having a meaningful moment inside of the convention center is really slim. So instead, you have to look elsewhere. Typically, con stars can be found at or near the five main hotels around the convention center (outlined below):

By trolling the lobbies, bars, or entrances of these areas, you greatly increase your chances of crossing paths with the object of your obsession. It’s not guaranteed but it is pretty surprising who you will run into and where. Crazy thing is that no one has the same experience twice. I have gone some years and ran into big names every day and other years I hardly saw anyone. That’s the beautiful unpredictable nature of Comic-Con! But remember, a bad encounter can lead to looking back on this trip with regret. So to prepare you for that chance of a life time, here are some tips to compliment the video: 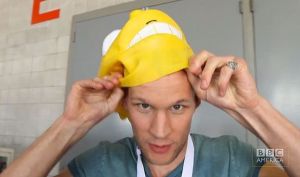 One last tip. The recognizable celebs are asked not to walk through floor to avoid causing a fan riot. However, between panels, celebs like to hit the exhibitor floor incognito. A couple of years ago, Matt Smith went out as Homer Simpson! Last year, Daniel Radcliffe did the same as Boba Fett. So if you see a normal (or nicely) dressed person in a random mask being followed by an official looking entourage, it might be a celebrity! Don’t out anyone but there might be an opportunity for a quick hello. I hoped this helped. I know there are a TON of stories out there of your celebrity encounter from past Comic-Cons. Share your story below and give us your tips below! Happy hunting!

Check out the rest of my Tip of the Day for this year. Special thanks to Sarah Pugh for her first time story. Leave a comment below with your cosplay tips. Check out past shows, tweet this post out, and make sure to subscribe to Shout! Factory.