It’s time for original and inspirational First Time stories as we lead up to San Diego Comic-Con. First up is Jenny- her story is perfect timing since we just came off of Star Wars Celebration and the hype for Episode VII begins! Make sure you read below about more information on how you can share your First Time story too!

How I Got Luke Skywalker to Remember Me at Comic-Con 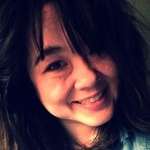 In July of 2004, I attended Comic-Con for the very first time with a group of Star Wars fans from the San Francisco Bay Area. I knew that Mark Hamill would be signing autographs, and I had been debating in my mind as to whether I would have the nerve to meet him. One of the fan club members sort of dared me to do so. For $85, Mark would sign anything you gave him at the Coolwaters booth. I just so happened to have a copy of the original novelization to Corvette Summer, Mark’s first major movie post-Star Wars. Yes, I am the only person geeky enough to have that book! Also, to this day, I am the webmaster of the Unofficial Corvette Summer fan site (did I really type that for the world to read?!).

My (now ex-) husband and I went to the Coolwaters booth on Saturday morning (approx. 10 AM) and picked up a ticket for $85. The ticket color was red and a receipt was given. At approximately 3 PM, we stood in line near the Coolwaters booth. There were many people in line already. Most were people who wanted their Star Wars memorabilia signed. During the wait in line, we were asked “Mark Hamill trivia” in order to get a prize – a special edition Dark Horse Star Wars comic book. We were told to take out our “pink” tickets. My ticket was red! So, I asked about the red tickets. The guy monitoring the line said that I was “in the wrong line” because “only pink tickets were for Mark Hamill signings.” Well, this same person sold me the ticket, and I had the receipt. He said that he would “never” give out a red ticket (!). After being very rude, he said he’d take care of my case after the contest. I showed him my receipt, and then he realized that he was being a total idiot, so he gave me the Dark Horse comic for free and allowed me to obtain my ticket. 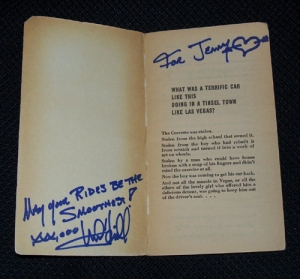 It was now 4 PM, and the signing began. Mark Hamill arrived around 3:55 or so. I was only in line about 15 minutes when it was my turn to get the signature! You can imagine how nervous I was at this point – I mean, I was about to meet Mr. Luke Skywalker himself?! Unfortunately, the guy who gave me a hard time earlier was the person who handed Mark the Corvette Summer novelization. Mark received the book opened on the first page. He asked if my name was “Jenny with a y.” I told him it was. He then noticed that the book was the Corvette Summer novelization. I then had to nerve to tell him that I had a Corvette Summer website(!). I gave him a piece of paper with the website address. He placed it in his left shirt pocket immediately! He said the book will be a collector’s item now and that he didn’t even have this in his collection. My brain was swiss cheese at this point – kinda like Dr. Sam Beckett in Quantum Leap. I told him thanks. He said, “Thank you!” [note that the autograph read: “For Jenny (with a heart) – May your rides be the smoothest! XXX, OOO Mark Hamill”]

I was literally dying afterwards. My hands were shaking, and I called my mom right away in panic, excitement, joy… basically, I was like a giddy teenage girl fresh out of a Duran Duran concert in 1984. But, that wasn’t the best part. Later that night, I, along with my husband and two of our friends, attended the Comic Book: The Movie panel from 7 – 8:30 PM. It was a great panel with top voice actor talent in the room. We all stood up at the end and applauded. Mark scanned the crowd (kinda like the look he had after receiving the medal in A New Hope). He saw me in the audience, looked straight at me and reached into his left pocket to see if the paper with the website info was still there! Was that cool, or what?! I actually made an impression on the Jedi Master. This was an experience of a lifetime!

Sounds like the Force was with Jenny! Jenny Hayes is a freelance writer and staffing industry professional based in San Jose, California.You can find out more about her at: http://www.cabbagejenny.com and @cabbagejenny
I want to hear your First Time story to Comic-Con! You have a chance to inspire many with your story so if you are interested, read my First Time post for more info. Thanks and can’t wait to hear from you!