Tip of the Day #5: 5 Best Comic-Con Hotel for Celebrity Encounters

You’ve heard the mythical stories of the once in the lifetime rare celebrity encounters during the San Diego Comic-Con. Could they be true? If you are new to Comic-Con, one of the reasons that may have enticed you to experience ‘Nerd Mecca’ are the epic stories of chance sightings of a celebrity. Whether it’s Joss Whedon, Robert Downey Jr, Benedict Cumberbatch, or Nathan Fillion, most of us hope to have at least one magical moment during the 4-days in San Diego. While not quiet as rare as Bigfoot, celeb sightings in the sea of other SDCC fans can have the odds stacked against you. However, the migration patterns of these sought after creatures have been tracked over the years- so while It’s not guaranteed, there are a few places that will increase your chances to catch a glimpse…or a photo…or a hug. Since the Comic-Con Hotel Sale is this Tuesday at 9a pst, some of you will be interested in which hotels have the highest chance of having a celeb encounter. Even the most mythical creatures have to sleep- so booking the right hotel will definitely increase your chances! 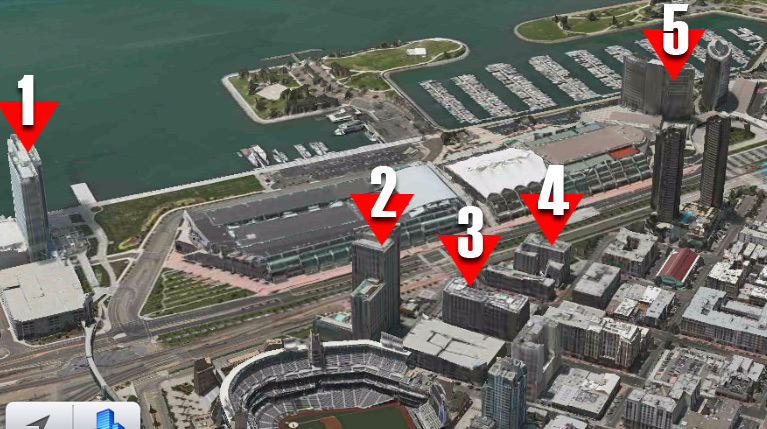 By trolling the lobbies, bars, or resturants, you greatly increase your chances of crossing paths with the object of your obsession. If you have never been before, the celebrity encounters can get pretty surreal at times and they happen at the most unexpected moments. Crazy thing is that no one has the same experience twice. I have gone some years and ran into big names every day and other years I hardly saw anyone. That’s the beautiful unpredictable nature of Comic-Con. Whether it’s the bar/lounge of the Hilton Bayfront, the Wired Cafe in the Omni, or in the elevator at the Marriott Marina Marquis, a lot if it is being in the right place at the right time. The Hard Rock is the obvious location for a lot of traffic but it can be pretty hard to catch a meaningful moment with anyone because of the crowds and commotion. Over the years, I met Guillermo Del Toro in the Omni, Robert Kirkman, at the Marriott Gaslamp, and the cast of Gotham at the Bayfront. You really have to keep your eyes up and be actively looking.

As a result, these hotels tend to be the most coveted ones. So for Tuesday’s sale, if celebrity sighting is less of a priority for you, you may want to choose hotels other than these to increase your chances. Hotels like the Marriott Gaslamp, Westin, Solamar, Horton, and the Manchester, are all still very close and will have a moderate level of celebrity and artist sightings. Happy hunting and I hope this year you and Bigfoot get a great selfie together. Soon, I will post an article about tips and etiquette when approaching a Comic-Con celeb.

For those returning to Comic-Con, which hotel was your best celebrity encounter? Leave a comment with your story!

21 thoughts on “Tip of the Day #5: 5 Best Comic-Con Hotel for Celebrity Encounters”