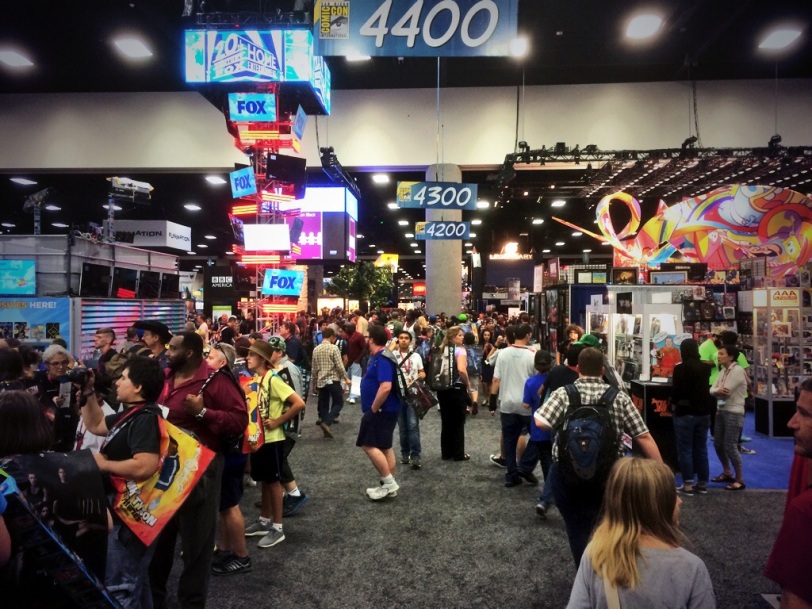 Can you believe it’s already over?? What a show! However, I am definitely suffering from PTCCD- or Post Traumatic Comic-Con Disorder. Symptoms may include, sluggish speech, slow mental capacity, narcolepsy, depleted funds, and obsessively checking the hashtag #SDCC on Twitter. Each of us invested a lot of time and energy into making the most of our trip to San Diego. While there were many ups and downs, overall I think the Comic-Con experience did not disappoint.

I spent most of my time on the showroom floor this year. I really enjoyed the layout of the space and the creativity of the booths. Some of the best highlights outside the Con included the Nerd HQ Fan Party, the Walking Dead Escape, SherlockeDCC, meeting some of the Gotham cast, and the Warner Bros Industry Party. There were 15 of us in our ‘CONtourage’ that have been attending Comic-Con from between 5-9 years together so this is a special tradition for us. From my 500th Article post, I made the offer to meet up for personal branding coaching sessions. The many people I met up with turned into amazing conversations and I look forward to what will come out as a result. Ending the con with my Battle for Multicultural Heroes panel was just icing on the cake. It was a great conversation with a stellar panel and an amazing crowd. I also spent a couple of nights walking the Hall H line in the wee hours. Here are some of the interviews of the experience (listen to more interviews here):

Finally, yesterday I asked you to share some of your favorite moments and this is what you said:

“Seeing the 4 min sneak peak of Age of Ultron at the Hard Rock/Samsung event!” @tabo4life

“A cool TARDIS hockey jersey was made even cooler (signed by Matt Smith).” @rinkrat32

“Sat 3am entry into B20 line was not without rewards! (Weird Al photo op)” @rinkrat32

“At Nerd HQ panel when Andrew Lincoln pointed at my BF and gave him a thumbs up… That was pretty cool :)” @TheEntertaiNerd

“Met Jack Black on Wednesday in the Gaslamp! He was wearing a stormtrooper helmet.” @Jen_Wills0513

“Stuck waiting for train to pass Fri night. @robertliefeld was next to me. We chatted for 15-20min. Surreal.” @TheArtimus

“My Son got his @Avengers poster autographed by everyone, but no one noticed the picture” @cofphoto

“Hayley Atwell asking to see my sister and I backstage at the Marvel booth.” @princesscharlie

“Running into fantastic Mojo Jojo and HIM cosplayers with my punk Powerpuff group!” @sirose

“Getting invited to sit on Max Brooks’s WWZ panel in my Star Trek cosplay!” @AliMattu

“I’m not shy to admit: I squealed like a girl (Christopher Nolan appearance).”

“Seeing a guy wearing only a g-string for costume was insane!” @jackiechc

Thanks all for sharing your favorite moments with all of the readers. I know there was many more out there so I’ll be asking for them in the future. With that said, I wanted to share my absolute favorite part of this year’s Comic-Con… 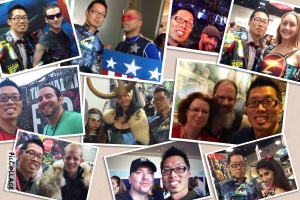 Hands down it was meeting you all! I was amazed with how many people I met this year that expressed their gratitude for Crazy4ComicCon. I was totally blown away by the genuine thankfulness and thoughtfulness of so many of you. The fact that anyone would find value in this site and feel compelled to stop to share that with me was an overwhelming feeling. When I set out to start this site 5 years ago, I had no idea how it would inspire me as a writer and how it would connect me to so many. 500+ posts later, it has shaped who I am today, brought clarity for my future, and made me even more committed to the Comic-Con tribe. Whether it was moments, minutes, or hours with each of you, it was time well spent for me. Your graciousness and generosity blessed me more than I could possibly describe in words. I know my site is far from perfect and I know there are still tons of challenges with Comic-Con. However, with your help, I hope to write/podcast/vlog even better content for 2015. Thank you again for allowing me to be ‘crazy’ and it won’t be soon enough until I can see you again. Much luv and blessing.

Updated 8-1-14
I also just added my podcast review of Comic-Con under the podcast section.