The internet was a blaze yesterday with the sudden announcement from Comic-Con International of a new ‘Wristband’ system to help manage the crowds now associated with the infamous Hall H. Called the ‘Toucan Tracker’, these wristbands will basically be given out to the late night and early morning eager attendees. Here is an excerpt from the Toucan Blog: 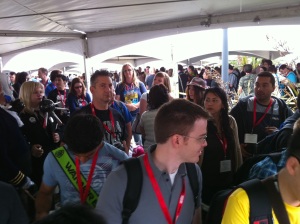 So basically, the amount equal to the Hall H room capacity will be given out to the first 6,500 rabid fans give or take a few hundred. Every individual who plans on standing in line has to be present to personally get ‘banded’ before 1:00a or after 5:00a. This means in theory, if enough people show up before 1:00a and they run out of wristbands, there will really be no need to stand in line unless you hope to be among the first to enter after the 1st panel is over. It also means that between 1:00 − 5:00a, it’s still a crap shoot if you will be able to get in until ‘wristbanding’ resumes at 5:00. There will still be camping, there will still be angst, and there will still be disappointment. So what was Comic-Con thinking???

I will tell you what they were thinking; WE ARE GOING TO MAKE THIS BETTER. Last year, the Hall H line dilemma was by far the most maligned and complained part of the show. The online nerd rage ringed on for weeks. For this year, we were all resigned to just accept the fact that history was going to repeat itself. However, to EVERYONE’S surprise, CCI rolled out this new crazy plan- because they were not okay with all the pain, complaints, negativity, and anger caused in the past couple of years. Contrary to popular belief, there are dedicated men and women behind that wall that are working hard to solve problems and create a great experience. Is this the right first step? We don’t know- but very few (really none) of us understand what it is like to be on the receiving end of over 100k frenzied fans. So the question is- will this new system suck?

The answer: Probably. But I think that is okay. Remember the evolution of badge sales a few years ago? Most of the following year badges sold out at the same show. So they changed it to have sales done each morning for the following year. Consuming too much time, that then changed to the online sales. Like it or not, after a few years, the badge system is now pretty much figured out. There is still too much demand, but that’s what you get with a great show. So this system will probably have a ton of flaws, problems, and holes. However, with our cooperation, they will drop what’s broken and keep what works. It might take a year or two, but I know they will figure it out. It’s all about EXPECTATION MANAGEMENT. The wristbands will help those have an idea if they are in or out- and that’s all most of us can realistically expect. Being in the complete dark until the load in is what drove people mad anyways. This will at least give the first 6-7k people relative ease of mind.

To some, this post may sound like I am being too optimistic. Your right I am. I am choosing to be optimistic- you can do that remember? In order for this to work, it is going to take our cooperation and honest feedback to figure this out. All of us. No sideline players on this one. No armchair quarterbacks. No Starfleet cadet standing anonymously off to the side. As a Comic-Con tribe, WE have to take this opportunity and help figure it out. Because guess what? It’s our fault! We are too passionate, too committed, and too fanatical to make Hall H easy. I heard a great quote in regards to attempting new systems:

“In order for a system to work, you have to be committed to work the system” -Andy Stanley

There is no perfect system. People are too organic, creative, changing, and dynamic for any system to solve all the problems. Is this how I would have done it? Maybe-maybe not. But I applaud CCI for trying something instead of settling for the status quo. Nerd rage, angry tweets, snide remarks, and general pessimism isn’t going to get us anywhere. We need to demand for better from our Comic-Con leaders but then accept the opportunity when it presents itself.

Personally, I’m not a fan of selling specific VIP tickets, clearing rooms, lottery system, etc, at this point. I’ve worked all those systems at other cons, and believe me, it’s not all unicorns and rainbows. The grass is the same color at all corners of the universe. However, it might lead to that someday, but until then, a simple ‘first come, first serve’ wristband system seems like a prudent step. So let’s engage this challenge together, gather constructive feedback, and offer solutions for the following year. Unleash the Kraken and let me hear your comments.

41 thoughts on “Hall H Wristbands?! What Was Comic-Con Thinking?!?!”