One of the most celebrated and defining aspects of the San Diego Comic-Con has been the emergence of cosplay. As one of the most identifying characteristics of SDCC, cosplay has been celebrated, satirized, misunderstood and embraced over the past 4 decades as the community has grown with the show. With this year’s ‘cosplay is not consent’ controversy, it has even become a heated topic of debate. But before we dive into it, let’s be reminded of the interesting origin of the our beloved cosplay term:

“The term cosplay is a portmanteau of the English words costume and play. The term was coined by Nobuyuki Takahashi of the Japanese studio Studio Hard while attending the 1984 World Science Fiction Convention (Worldcon) in Los Angeles. He was impressed by the hall and the costumed fans and reported on both in Japanese science fiction magazines. The coinage reflects a common Japanese method of abbreviation in which the first two moras of a pair of words are used to form an independent compound. Costume becomes kosu (コス), and play becomes pure (プレ).” (From Wiki)

Besides proving that Asians are just awesome, it’s clear that after 30 years, cosplay is here to stay. However, as much as cosplay has evolved over the decades, so has the etiquette surrounding it. Around 2007-8 when Comic-Con shot up to meteoric status, I think some of the ‘growing pains’ was felt most by the cosplay community. I remember seeing a wave of YouTube videos of guys making snarky and lewd comments to as many sexy cosplayers as they could find. Ogling cosplayers was part of the unfortunately norm during those explosive years but that is starting to change. Over the past year, many cosplayers like Meagan Marie, have spoken out about the theme that “cosplay is not consent”. Cosplay may be funny at times but sexual harassment is not. I remember in 2008 feeling pretty disturbed by the objectification of these cosplayers at the hands (and eyes) of so called YouTube ‘journalists’. I’m glad to see it has diminished quite a bit and to see that cosplay is being embraced for the art, not the boobs. We still have a long way to go but I think Comic-Con is the environment to lead that change. Like any important issue, it’s a complex one which takes a lot of dialogue. So as we continue to elevate the discussion, here are some tips to cosplay etiquette at Comic-Con: 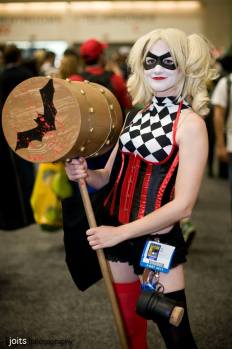 Remember, it DOES NOT MATTER how a cosplayer is dressed- respect always comes first. Overall, cosplayers are at Comic-Con to not only have a great time but to make sure YOU have a great time. Where would we be without them? Many cosplayers plan, save up, invest countless hours, and obsess over the smallest details to make sure their costumes are perfect for you. Make sure to make them feel appreciated and respected. We want Comic-Con to be the premier platform for the world’s finest costumes- and we as fans have control over that. As long as we value and encourage our cosplayers, they will bring their very best to the show. Thanks for letting me rant and thanks for all of you who have championed this cause before me. If you ever had a negative experience as a cosplayer share a comment about how it made you feel below.

Cosplay photos by Joits Photography
Check out my past Tip of the Day posts.