With less than a couple of weeks left till Comic-Con, I post our last Reader’s First Time story for the year. It’s been so inspirational reading your journeys to SDCC and it’s been an honor to post them here. By taking your experience and sharing it with our community, you helped ease the anxiety of other first timers while helping them understand what to expect from the show. Thanks so much for your contributions and I look forward to many more stories after the 2014 show. If there is time, I will post my own first time story right before the show. Thanks Robert for anchoring this final installment… 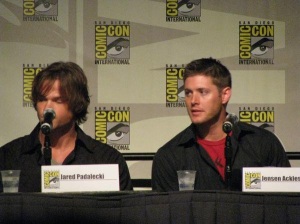 I’ve always been a fan of the geekier things in life. I grew up with comics, video games, and other elements of pop culture. I, however, had never been to any comic convention but I always knew I would enjoy one. In 2007, I moved from Florida to Arizona and at the time, my wife was a huge fan of the show Supernatural and I read that some of the cast had been at San Diego Comic Con just a month prior. The next year rolls around and we decided to buy badges and drive to San Diego.

The high point of my first SDCC was the very first day and the excitement of being in that environment. I watched the Thursday live coverage of SDCC on G4, knowing I was going to be in all that fun chaos the following morning had me really excited. Thursday night we drove from Arizona to San Diego and got in around 5 A.M and went immediately to the convention center and got in line. It was a very exhausting day, mentally and physically, but it all paid off when I got to go the “24” panel that featured Keifer Sutherland. I was a huge fan of the show and the only thing I HAD to do the first day was get into that panel.

The hard part of my first SDCC was not being prepared for anything outside of what panels I wanted to go to. Where do I pick up my badge? What is this line for? Where is Hall H? I’m sorry, did you say $4 for a bottle of Sprite? My biggest suggestion for anyone attending SDCC for the first time is to ask a lot of questions ahead of time to someone who has attended previously.

My hero is a mystery person who was also from Arizona. He had some sun block that he allowed me to use when we were outside waiting in the line for Hall H (this was before they put up tents outside). He saved me from getting burned so I’ll always be thankful for that lol.

Read past First Time stories and make sure to write your story down from this year to send in to me in the future!