This post starts the first of many “Comic-Con Tip of the Day” posts for San Diego 2014. I can’t believe we are already in preparation mode- where did the rest of 2013 go?? Like last year, I will be regularly posting thoughts ranging from minor to major tips to help you effectively navigate SDCC. While many of these posts will focus on brand new attendees, there will always be something for even seasoned Con vets. This will be my 9th time and I still learn something new every year. Your comments/questions are really valuable and you can help the larger Comic-Con community by leaving your thoughts. So on with the first tip of the day!

We’ll start pretty basic- I am getting a lot of questions from hopefully attendees about which days to attempt to purchase for the upcoming Open Registration sale. If this is your first time, it’s hard to know which days to purchase for if you are not going for all 4 days. The sale is suppose to be ‘early Spring’ so it will probably be on a Saturday over the next few weeks. Like every year, the programming changes and evolves but in general, the tickets sell out in this order: Saturday, Friday, Thursday, then Sunday. So here are a brief descriptor that might help you in your decision making process:

Historically this has been the busiest and craziest day of the Con. If you want to experience SDCC in it’s fullest grandeur, this is the day to do it. You not find a more wretched hive of scum and villainy than on Saturday. The sheer magnitude of fans in the convention center, around the center, on the floor, and waiting in lines is truly staggering and intimidating for even seasoned veterans. Programming drives much of the crowds with (traditionally but not guaranteed) Legendary, Lionsgate, Warner Bros/DC, and Marvel in the mighty Hall H- which is the epicenter of the nerd frenzy on Comic-Con. Last year, a lot of the more popular TV shows like True Blood, The Vampire Diaries, Arrow, and How I Met Your Mother were in the second and third size rooms (Ballroom 20 and Indigo Ballroom). The orbiting events around the center are also kicked into high gear to help engage the crowds. The showroom traffic is traveling at a glacial pace making it a challenge for the impatient. It’s a VERY busy day and there is no way you can come close to seeing it all. So if you want to experience a good slice of Comic-Con, then Saturday is your day. If you want to cover more ground then you might consider another day. 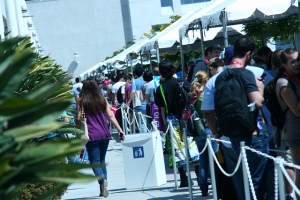 This is a very busy day too with typically a respectable, crowd inducing programming schedule. Last year offered up some amazing panels like Veronica Mars, The Walking Dead, Agents of SHIELD, Game of Thrones, along with a few pilot screenings. The programming is designed to split fans up to help with crowd management. However, without the gravity of the studio powerhouses, there is generally less people sleeping out over night- which causes a lot of the unnecessary frenzy. Friday is probably my favorite day because it’s not as difficult to cross the entire convention but the overall hype is still very high.

This day has probably grown and evolved the most over the years. Once relegated to 2nd class status, Thursdays now offers some amazing options but with less of the hassle. Ever since the Twilight craze of the late 2000’s (first time with overnight campers), Thursday Hall H has been kicking off Comic-Con in style. Ender’s Game and Divergence was presented in Hall H, while the X-Files Anniversary, Psych, and Sherlock were presented in the other Ballrooms. One of my personal annual favorites is the The Visionaries panel by Entertainment Weekly. So while some of these are not necessary giant properties yet, but they are still some of the best programming the week has to offer. The crowds, while still busy, is manageable. On this day, you will probably find the least amount of conflicting panels between Hall H and Ballroom 20 that you might be interested in attending.

Has been the traditional ‘Kids Day’ and has offered a high amount of programming aimed for younger con attendees. A lot of fans use this day to do their heavy shopping on the showroom floor. However, in recent years, some amazing programming has been offered making it worth staying till the end of the show. Hall H carry’s the workload of big panels with Ballroom 20 closed so a lot of the fandom is concentrated in that room. Last year Hall H brought The Doctor Who 50th Anniversary, Community, and Sons of Anarchy. In general the crowds are manageable, however it’s always in a state of flux depending on the line up in Hall H.

Many ask if Preview Night worth it if you are there all week. The answer is yes and no. If you just want to check it out early and don’t really have any real agenda (or collecting), then it shouldn’t be high on your priority list. Preview Night best serves for those in search of SDCC Exclusives or those that are blogging or live tweeting about what is on the floor. If you don’t have an agenda to be there, you might just wait till Thursday to see the floor. The other advantage of Preview Night is getting a chance to see the Warner Bros pilots in Ballroom 20. These are typically shows that are releasing this fall so you will have to decide how valuable it is to purchase PN without knowing what the TV line up will be. My main advice is that if you know you will be spending the next four days in line for programming, PN is a way to get the showroom floor out of the way early.

I hope this overview helped. I know it’s hard to make decisions about buying days when you don’t know what is offered. The programming schedule usually is not released until a couple weeks from the show, so you kind of have to use the Force when selecting. However, I hope my post helped you choose if you have a limited amount of days to attend. Thanks so much for reading my first Tip of the Day and please tweet this out to your friends who are going to Comic-Con for the first time. As always, your comments and suggestions are incredibly valuable to myself and the Con community. Thank you!