For this year’s nerdy Halloween pumpkin, I decided to carve something I have always wanted to do- the Death Star!! Being one of the most iconic round objects in pop culture history, I couldn’t resist. Over the years, I had scene a number of versions online so it was helpful to have visual references. With a pending pumpkin carving contest at the new workplace, the pressure was on for me to show off my geekiness. Here was the process:

Since this is mostly a skin peeling technique, the right tools are everything. I bought a simple wood carving set from Michaels for about $10.  I first started with the trench which serves as the equator for this battle station. 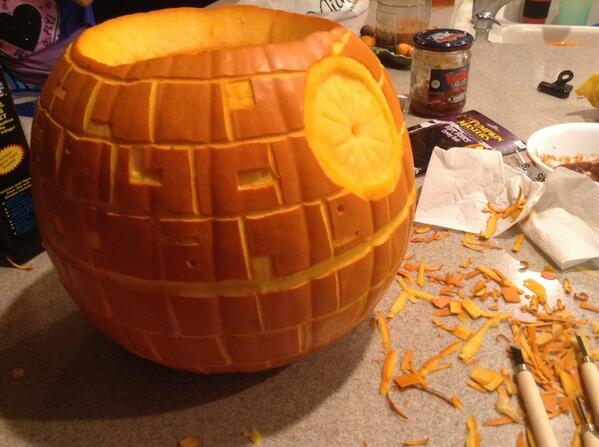 From the trench, I measured and cut several horizontal lines. Then the vertical lines were done in a brick pattern. I finished the pattern with a series of randomly cut squares. The big ‘friggen lazer’ circle is where I spent most of my time. Besides getting the perfect circle, I had to make it concave and then thin enough for it to be illuminated with a light source. Mess this up and the whole project is ruined. Fortunately, it turned out just right.

Fortunately, I had some Micro-Machine Star Wars ships on hand (uh, who doesn’t?). Mounting them with black sprayed coat hanger wire, they were soon in orbit engaged in battle. I bought two LED lights ($2.99 at Michaels) and attached one to the inside of the laser circle and other was in the base to light the rest of the pumpkin.

I then created a base using a round wood board and a small cardboard cylinder (both found at Michaels). I used epoxy to connect them because the pumpkin was very heavy and I didn’t want to risk it coming apart. After spraying it black, I painted in a star field giving it a hint of context. 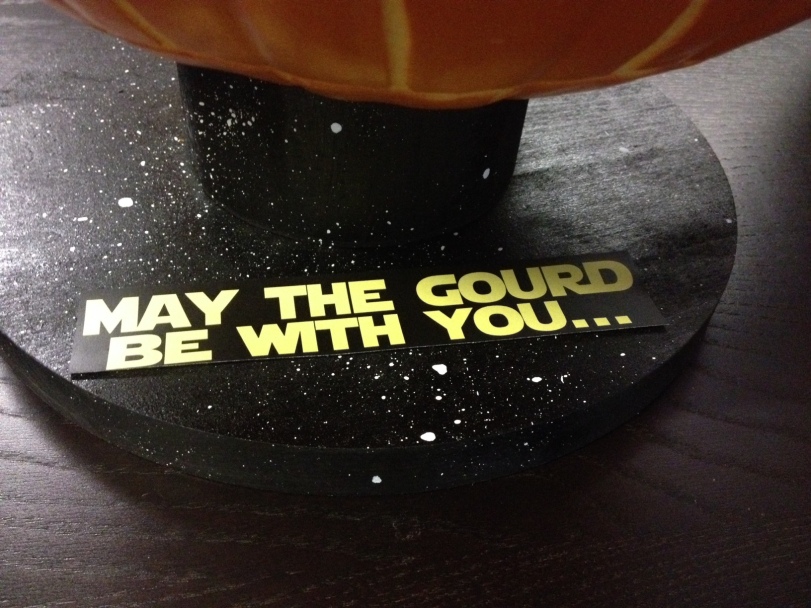 Lastly, I added this little phrase for a fun little final touch. All in all, this project took about 4 hours and costs under $30 (not including the pumpkin, which I got for free).

My effort was rewarded by winning the 1st place “Golden Pumpkin”- which was an honor considering the other awesome entries. I narrowly beat an AMAZING dog carved pumpkin by a fellow co-worker. Perhaps it was the Star Wars theme playing from my iPhone inside my pumpkin that tipped the votes in my favor 🙂 Given a little more time, I would have wired it with battery operated lights and mounted it on a rotating stand. Oh well, there is always next year! Let me know what you think and any suggestions would had on how to make it even nerdier!

4 thoughts on “My Death Gourd”