I know this might pale in comparison to some giant company’s Exclusives but I felt this was worthy to write about. I find nothing more inspirational than a fan decides to combine their skills, passion, and commitment for the sake of Comic-Con. Sure not a ton of people will find these little treasures but I hope it serves as an example of how one geek can touch the lives of others. The fact that it’s so unique and SO exclusive is the beauty of it. Here is the story…

By @GeekyHooker
A not-so-long time ago (2 years ago), in a galaxy not-so-far away (Milky Way, Earth, Houston TX), I taught myself how to crochet. I tinkered around, starting out with lopsided generic little dolls, until I got bored and started making lopsided little superheroes instead. 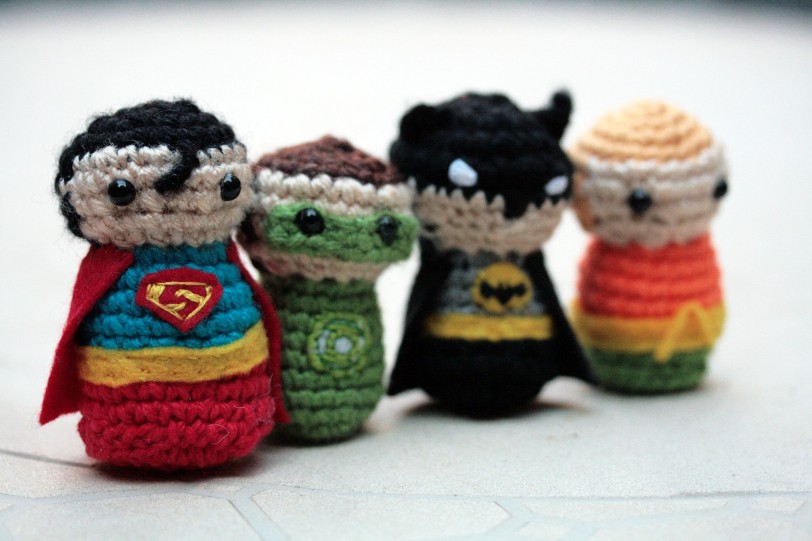 Then I had the crazy idea (largely inspired by the work of Catlanta) to scatter my critters at Comic-Con for people to find. I set up dedicated crochet gmail and twitter accounts, and went out to sunny San Diego with 11 little critters in tow, all while thinking to myself that this could potentially be a very, very stupid idea. Why am I doing this?? Sure, the critters were essentially made for practice, but it still took long hours to make each one. What’s going to stop people from swiping the critter and never letting me know about it? As much as I wanted to have a carefree attitude about that possibility, all that time spent would be for nothing. That would give me a sadface. Here goes nothing.

The first critter I decided to drop was Aquaman. I was waiting in line for Ballroom 20, and I thought I was being clever by dropping him outside near the marina – because it seemed fitting that AQUAman would be placed near a body of water (har har!). I stealthily dropped little Aquaman at a water fountain, snapped a photo, and quickly walked away. I fell back into the ever-growing line for Ballroom 20, and clearly by “stealthily dropped” I meant “SUPER CONSPICUOUSLY”, because immediately after I got back in line a group of people walked up to the water fountain to see what I had left behind. STEALTH MODE FAIL. I heard some chatter, and then the small crowd dispersed. I didn’t see who took Aquaman, but minutes later my phone buzzed with the following tweet:

The feeling I got when I saw that tweet…it was just a simple tweet with a photo attached, but it was enough to be extremely rewarding to me. Suddenly this wasn’t such a stupid idea anymore. One critter down, ten more to go. After all was said and done, 9 out of 11 of my little buddies ended up with happy confirmed homes! VICTORY! NO SADFACE! My little dudes were slowly taking over the world! 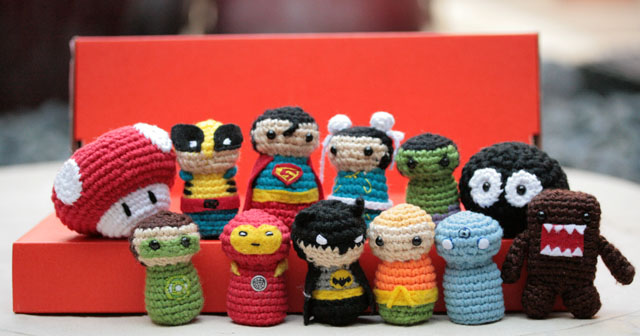 I had so much fun the first time that I did the drops again the next year I went to Comic-Con, this time with 15 critters. Unfortunately I didn’t get as much of a turnout that time (semi-sadface?), but I’m still determined to make a third round of drops this year. If you’re going to be at Comic-Con, follow me either on twitter or facebook to track my drops. I don’t have a rhyme or reason in terms of when I drop my critters, but here’s a few basic guidelines in terms of where (oooh, the mystery!): 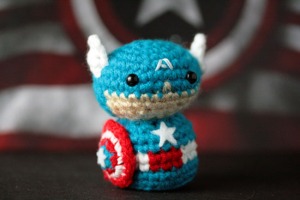 That’s all the hints I can give for now. The drops are simply based on where I happen to be, and if I happen to spot a good drop location. And if you find one of my critters out there, please let me know! It’s the awesome responses that I get from people that make the critter drops all worth it for me. Otherwise, follow my blog for updates on the upcoming adoption lineup, and follow me on twitter or facebook to keep track of my drops when it’s time for the GEEKY EPICNESS OF COMIC-CON! And most of all, happy hunting!

Thanks @GeekyHooker, these are Uh-Maze-Ing! Thanks for using your creativity and passion to bless completely random Con fans out there. I know each of these will find a loving home and I think it will serve to motivate others to try something creative of their own. If you are inspired by her story then leave a comment and let her know!