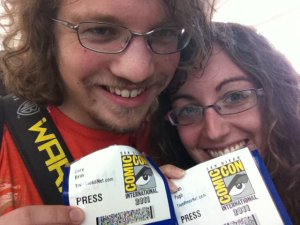 I am a TV Nerd.
I’m not necessarily a die-hard fan of any one show, so much as a fan of TV in general. Since high school, everything I have written, studied, produced, and pitched has had something to do with TV. And that very television fandom was a gateway into pop culture in general.

I made the decision in 2010 that my boyfriend Cory and I would make the trek from Pennsylvania to the San Diego  Comic-Con. I had two goals: Tin Tin (to see Steven Spielberg) and True Blood. They were on the same day. The 1st in Hall H and the 2nd in Ballroom 20. I knew my odds of getting into both were slim. So I put my attention on my preference – Spielberg. We got in line at 6am. And when the lights in Hall H dimmed, I screamed like a twelve-year-old at a Bieber concert when Steven took the stage.

Afterward, we hauled over to the opposite side of the convention center to the Ballroom 20 line. It was long, twisting back and forth around tents and up and down stairs. Cory and I ended up at the bottom of a staircase. It didn’t look good. Everyone in line was there for True Blood. So we waited. And the line moved little by little. Finally, we ended up getting in two whole panels before True Blood. I consider this one of my ultimate success stories – Hall H and Ballroom 20 on the same day. Boom.

Saturday held its own surprise. This is a great example of things going on outside of the con. “Cowboys and Aliens” was premiering in town. All weekend long, they were giving away tickets at random spots downtown. They were giving away clues on Twitter, but I was too busy to pay that much attention. Saturday morning, we were walking from our hotel to the convention center when we passed a group of people setting something up at a street corner. I kept walking. Until, that is, I saw people running at full-speed toward me. And I’ve been to enough pop culture events to know if you see people running, RUN WITH THEM (This is a sibling rule to the “If you see a line, stand in it” rule).  I grabbed Cory and bolted back to the corner. We were 5th in line to get a “brick of gold” which in fact, held golden tickets to the premiere later that night.

I only have one regret, which was our own fault. So many people told us not to over-plan. There’s no way you’ll see everything you want to see. Don’t stress yourself out. So, we picked a handful of panels, events, etc. that we were dead-set on attending. Spielberg at Tin Tin, True Blood. BUT, we were so afraid to “over-plan” we really missed out on a lot of things. We simply did not use our time wisely. Which is utterly ridiculous when you’re at Comic-Con. Inexcusable. 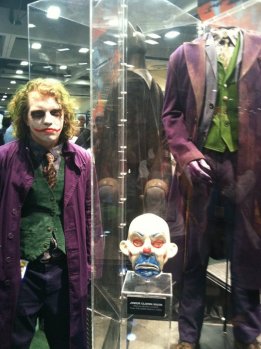 Lastly, our hero wasn’t someone who attended the con with us. He was a friend who had years of con experience and, genuinely looking out for us, sent us a 30 point message of helpful hints. Everything he said was dead-on from “Swag is everywhere!” to “Bring sunscreen. Seriously.”

We’ll be back again for the third time. My dad and brother will be tagging along. I can’t wait to share that experience with them.

One thought on “Sarah’s First Time…”