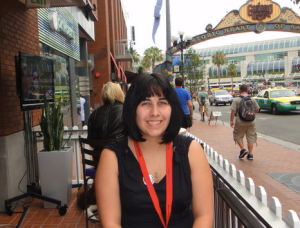 For today’s ‘First Time’ we have Comic-Con super-nerd @SDCCNerdsAttack– thanks Barb for sharing your story!

It feels like it was many moons ago but my first San Diego Comic-Con was in 2010. Actually, it was my first Comic-Con ever. That’s right, I jumped right in and wasted no time.  I have no problem admitting the reasons I went were TV related. I didn’t know much about comics at the time, I was more interested in seeing shows like “Dexter,” “Psych,” and “The Big Bang Theory” in person.  I had always been a little nerdy though. I grew up watching cartoons like X-Men and Teenage Mutant Ninja Turtles.  I watched The Power Rangers every morning before school when I was a kid. I loved playing Adventure Island on my NES and I even had Atari! Don’t even get me started on my love of Jurassic Park and dinosaurs.  I just hadn’t crossed over to the comic side of things yet.  It didn’t take long for that to happen though! I now have a pull list at my local comic shop and have converted my nephew into a full time nerd. Granted, he’s two which makes it easy! 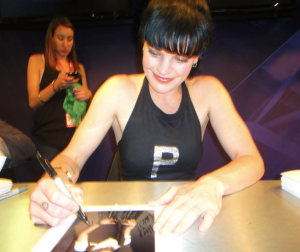 When I think of my first time I’m amazed at everything. The whole trip was a highlight for me.  It seemed like every day was filled with a new adventure and awesome experiences. That’s why it’s hard to just pick one highlight! I’d have to say though, seeing Barenaked Ladies perform the theme from “Big Bang Theory” was pretty high up there, as was getting to meet Pauley Perrette from “NCIS.”  I’m a huge fan of hers and it was pretty great to get to meet her and ramble on about the time I dressed as her character for Halloween! Ah, the early stages of cosplay!  But seriously, the entire trip was a highlight.

This doesn’t mean we didn’t have a few issues. When we started planning this trip there were three of us.  In fact, even when two of us landed in San Diego we were still expecting the third person to already be at the hotel. Sadly, that didn’t happen and instead of the hotel and car rental being split three-way, it was now just split down the middle.  In the land of Comic-Con where prices are high already, this really put a hurting on the wallet. The good news was that no one had to share a bed! See, have to try and see the bright side! 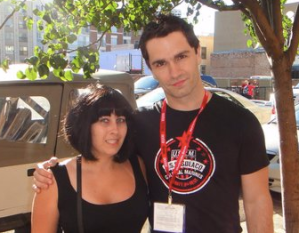 I have to say, I had a SDCC hero when I attended again in 2011. It kills me that I can’t remember her Twitter handle at the moment, but she had just ran into the “Being Human” cast outside the convention center. She knew I was a fan and passed the word along to me and I’m glad she did! As I was leaving my hotel, who did I happen to run into? The BH cast! I was able to ask Sam Witwer a question I wanted to ask during the panel and got my photo with him. (The other casts members were busy and on the phone, didn’t want to be rude!)

All in all, San Diego Comic-Con has been nothing but a positive experience. It’s one that I hope that every nerd gets to check out at least once in their lifetime!

One thought on “Barb’s First Time…”