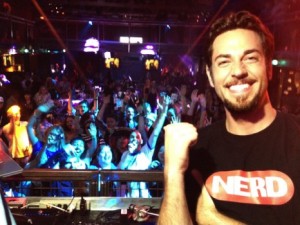 If you are new to the San Diego Comic-Con, one element (among many) that sets it apart from the rest are the strong presence of various creative events surrounding the convention. The reputation and the amount of these extra-curricular events has grown over the recent years, making them some of the highlights of the show. The first couple of years I attended Comic-Con, I really focused my attention on the activity inside the convention center but now am intentional about carving out time exploring the Gaslamp. Some events capitalize directly on the nerd fandom while some capitalize on the sheer volume of people. Some events are highly publicized while others you discover like a prize in a cereal box. A few examples over the years:

But don’t be fooled. Just because it’s downtown, doesn’t mean it’s going to be a great event. Having space in the Gaslamp doesn’t ensure quality control or a nerd appropriate theme. Rob Zombie’s concert and the Playboy Club events just didn’t fit into the best spirit of the show thus garnering much criticism. The SDCCblog has a great listing of the current off-site events so keep checking it for updates. Also follow @OutsideComicCon.

These extra events have become almost as important as the main convention at SDCC so it’s important that you plan to explore them. Start doing your research and setting a schedule. Besides being a great place to meet/see celebs, they are also a fantastic place to make new friends. Let me know some of your favorite off-site events by leaving a comment below. Thanks!