Kathleen Douangsanith (aka:@Imakatt) shares her unique experiences of ending her teen years at Comic Con. SDCC is more than just an event, it has become a rite of passage in pop culture. Thanks Kat for contributing such a great article!

So this year at San Diego Comic con 2011 I went all four days again! My cousin also went with me because she got into an internship at San Diego Asian Film Festival to do a documentary and chose to do it on me and my cosplaying.

Not only was this my last year cosplaying as Pikachu, for which I am widely known for my many people, it is also my last con as a teenager! That is right, after this year, I will be going to comic con as an adult. It was really hard for me to imagine that I spent my entire childhood at comic con and now I am at the stage where I am truly an adult. . . oh who am I kidding? I will always feel like a child at comic con! This year, I had a huge variety of cosplays I wanted to go, but I ended up doing just two because I gave my cousin one of my costumes to wear since this was her second year going. And let me tell you, she LOVES cosplaying now and is definitely doing it again next year! Yay for converting!

The morning started at 4:30am and didn’t finish until we left the house at 6:30am. Yes, it literally took me two hours to get ready. I’m a girl okay? We live 10 minutes away from Qualcomm stadium so before we went there, we stopped by a 24/7 Mexican fast food joint to grab lunch for the day and then we were off! We took the first trolley on the red line, and let me tell you; It was packed! I didn’t know what to expect before it was my first time going on the trolley but I surprisingly had a lot of fun on the ride despite being cramped up.

I had an eye irritation that developed on Wednesday but I didn’t let that bother me and I stuck it out like a trooper. As pikachu, I didn’t get that many pictures taken of me, except by a few people but that was fine with me. The next three days however, I was stopped every three seconds for a picture and it was crazy! Now, I was NOT cosplaying as Cooking mama (Lol), I was cosplaying as Hungary from the anime Hetalia: Axis Power. About half the people knew who I was and the other half thought I was cooking mama. Still, that didn’t bother me because I was having way too much fun. I carried a pan with me and everyone loved it because every time someone wanted to take a picture with me, I’d either pretend to hit them or they would eagerly ask me to hit them, to which I happily obliged. 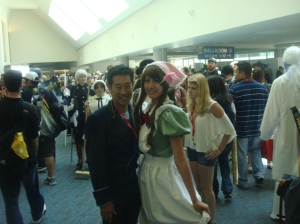 Meeting people who cosplayed from the same series as me and gaining new friends was the highlight of these four days and they will definitely be people I will cherish forever. Of course, meeting Grant Imahara, Greg Grunberg, and Doug Jones randomly on the floor was a big plus too! Because of one common interest, we gained a bond that seems unbreakable. It was also really awesome to see old friends too! Comic con is literally the only time I get to see some of my friends who either come from overseas or across the country and each time it’s like this huge family reunion!

Everyone assumed I was at least 16 or possibly 17. The oldest guess I got was 18. But when I told them I was really 19, in college at UCSD, everyone flipped as switched and told me I was lying. It was really amusing to see their reaction, but yes, this is my last year as a teenager and next year; I will be twenty and still cosplaying and going to comic con until my heart’s content.

It’s very hard for me to put into words what the con is to me, because it’s everything. It’s my second home, it’s where I met my best friends, it’s were I met my first ahem boyfriend, and it’s where I plan to spend the rest of my life! This year was by far my best! I am now an Adult! (No I’m not)