The weeks leading up to 2010 Comic Con, Twitter was a blaze with the news that extremist religious fanatics, Fred Phelps and Westboro Baptist Church had set their gun sights on the San Diego Comic Con. Fred Phelps and Westboro were already infamous in the media for picketing the funeral of a US soldier, various gay/lesbian events, and even Jewish holocaust centers. With the belief that Comic Con is a form of idolatry, they were aiming to show us the light of what they believe. As shown in the image above, their only agenda is to bring their message of ‘God hates you’ to anyone that will stop and take notice. As a Christian, I was enraged that this so-called ‘church’ would dare to twist the love of God into something so perverted and atrocious. Well, Fred and his peeps may have gone up against all kinds of opposition before, but they have never had to take on the mutants, robots, and superheroes of Comic Con. With tensions rising, I made every effort to be at ground zero of this stand-off.

The anger by Twitter fans was raising day-by-day as we crept up to the con. I started to fear that this once all loving and peaceful convention might erupt into violence between the good and dark side of the force. When 1:00 on Thursday arrived, I started to make my way to the front of the convention center. I made a final check of Twitter and sure enough, there were already Tweets confirming the presence of the unwanted intruders. When I got to the street (protest was happening on the street opposite of the Con) I immediately noticed the commotion. Quickly scanning the area, I saw signs, cops, and a whole lot of people. I thought, ‘oh man, this is going to get out of hand quick…’. Upon arrival,  I realized that the sizable, sign-toting group was not from Westboro but from the Con fans themselves. 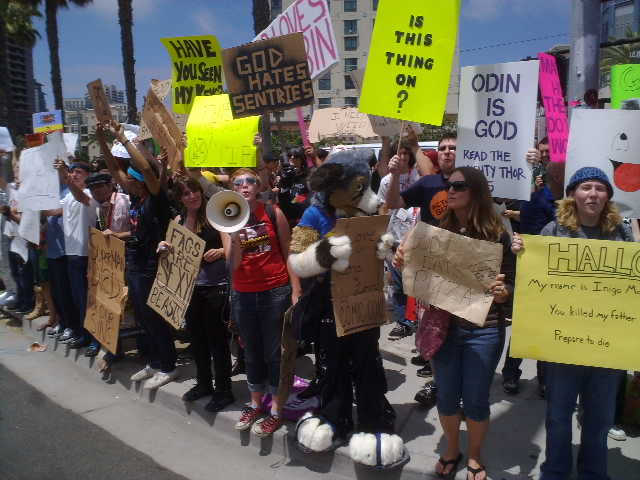 Westboro was there about 20 yards to the left  draped in American flags and each carrying multiple signs. However, instead of coming in force, Westboro represented with three adults and one kid- sans Fred Phelps. Yes, their imperial leader failed to show up and support his own troops. As evil as Darth Vadar is, even he knows that you can’t launch a fully armed and operational battle station without leadership.

The Con fans were out in serious force numbering about 100. Many of them were toting signs that mainly mocked the absurdity of Westboro’s as the ‘God hates kittens’ exemplified. While it was fun being in the mix of the crowd, my main goal was to talk to a Westborian and get down to the truth. Hiding behind a wall of about a dozen police officers, standing and mounted on cycles, it was clear Phelp’s peeps were not interested in talking. 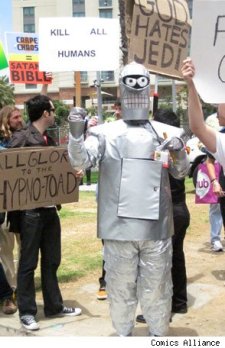 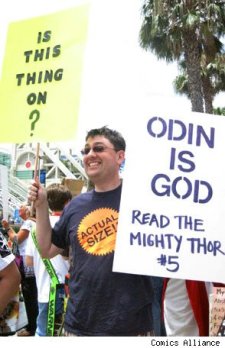 I was disappointed that I wasn’t going to have a chance to hear straight from them what they believe and why they needed to be at Comic Con. So instead I took the opportunity to talk to as many fans as I could about the experience. With a video camera in tow, I asked fans why they were there, what they thought of Westboro, and what they would tell Fred if he were here. The general response might surprise you…

Overall, I was really impressed with the ‘love’ present among the mob of Comic Con. Not to underestimate the fans, but I thought the fans might fight hate with more hate. However, as I talked with individuals, I found that most were not hateful at all. In fact, many were expressing love and compassion towards Westboro with a desire to just be understood. Some went so far to want to invite Fred into to fold to experience Comic Con first hand. I talk to probably a dozen people in-depth and none of them wished ill on them. If anything there was a lot of sympathy that Phelps had misled his flock- especially the young child present. I had never been prouder of the Comic Con community.

My personal beliefs with the majority represented was irrelevant. As human beings, we have inalienable rights to stand up against oppression and injustice in whatever form it may take. I don’t have to share beliefs in order to right the wrong of this moment. Westboro was there to judge/oppress and I felt like it was my duty to defend. I know I answer to a higher calling and my conviction was to stand with my nerd brothers and sisters.

However, we (Comic Con fans) didn’t do it perfect either- and we have to own that. In some circumstances, there were a select few that  had quite a bit of, as Mr. Spock would say, ‘colorful metaphors’ for  Westboro. As good as that might have felt, we all know that is not how progress is made. To infect change against opposition, Martin Luther King Jr had a ‘dream’ not an insult. It was also good that the police were separating the fans from Westboro because I don’t think it would have ended well for either group. I do think that the fans coming out in droves, bringing their own brand of fun to this otherwise despicable picket really salvaged and redeemed this day. Comic Con is about misfits finding love and acceptance together- and the bold anti-picketers preserved that. Every fan remembers what it felt like in the past to be judged and negatively stereotyped. Today was the day that we fought back against that. Today was the day that nerds won. Today was the day that we won our Independence Day! (ok, sorry to borrow that cheezy line from that crappy movie).

The picket of Comic Con 2010 was a unique event and I was fortunate enough to be there to experience it. It was the first time in the history of Comic Con and hopefully the last. If not, then I am confident that the SDCC tribe will courageously rise up and represent with truth, justice, and the Comic Con way.

The following is a short video for you to get the feel of the experience.